Featured Publications in the Collaboratory 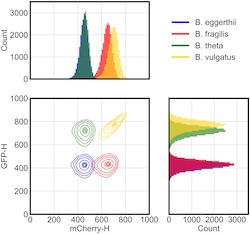 Pinar Gumus Balikcioglu, Olga Ilkayeva, Phillip White, James Bain, Michael Freemark and colleagues measured branched-chain α-keto acids (BCKAs), glutamate/glutamine and uric acid and explored their relationships individually with changes in weight and insulin sensitivity before and after a lifestyle intervention in adolescents with obesity. BCKAs and glutamate/glutamine may serve as biomarkers of insulin resistance in adolescents with obesity while uric acid serve as a predictor of weight loss in response to lifestyle-intervention.
Read full text in Endocrinology, Diabetes & Metabolism

Jörn Coers, Raphael Valdivia, Dennis Ko and colleagues ran a large genetic screen of chlamydia that identified its cloaking mechanism, which has allowed the disease to evade detection.

Elizabeth Hauser was part of a large, international collaboration that conducted a genome-wide association study (GWAS) of coronary artery disease (CAD) incorporating nearly a quarter of a million cases, in which existing studies are integrated with data from cohorts of white, Black and Hispanic individuals from the Million Veteran Program. This study highlights the value of diverse populations in further characterizing the genetic architecture of CAD.

An antiplatelet response gene expression signature is associated with bleeding

Serum metabolomic analysis of men on a low-carbohydrate diet for biochemically recurrent prostate cancer reveals the potential role of ketogenesis to slow tumor growth: A secondary analysis of the CAPS2 diet trial

Ashley Chi and colleagues investigated the effect a low-carbohydrate diet had on prostate cancer growth using both animal models and participants in the Carbohydrate and Prostate Study 2 (CAPS2) clinical study.

Lingchong You, Lawrence David and team investigated spatial partitioning of microbial communities and its effects on biodiversity. Their results reveal a general mechanism underlying the maintenance of microbial diversity and have implications for natural and engineered communities.

Diego Bohorquez and colleagues discovered that cholecystokinin (CCK)-labeled duodenal neuropod cells can tell the difference between sugars and artificial sweeteners. They showed that preference for sugar over sweetener in mice depends on neuropod cell glutamatergic signaling. By swiftly discerning the precise identity of nutrient stimuli, gut neuropod cells serve as the entry point to guide nutritive choices.

Rasheed Gbadegesin, Gentzon Hall, Alejandro Ochoa and colleagues performed next generation sequencing in patients with familiar steroid sensitive nephrotic syndrome, a common pediatric kidney disease that is responsive to steroids. They identified a homozygous segregating variant in the gene encoding clavesin-1 in a family with three affected individuals.

Role of DNA methylation on the association between physical activity and cardiovascular diseases: Results from the longitudinal multi-ethnic study of atherosclerosis (MESA) cohort

Yongmei Liu and colleagues used the Multi-Ethnic Study of Atherosclerosis (MESA) cohort to examine the role of DNA methylation on the association between physical activity and cardiovascular disease.

Ru-Rong Ji and colleagues surveyed the "junkyard of cancer drugs" that might have the potential to be repurposed to aid in chronic pain and discovered that kenpaullone and similarly-acting kinase-inhibitory compounds, as well as delta-CAT gene therapy, have the potential to become new tools in our toolbox against chronic refractory pain, including nerve injury pain and cancer bone pain, and likely against other forms of chronic pain.

Bevacizumab-induced hypertension and proteinuria: a genome-wide study of 1000+ patients

Kouros Owzar was part of a team that conducted a GWAS meta-analysis on 1039 patients of European ancestry who have been treated with bevacizumab, a medication used to treat a number of types of cancers. This is the largest study of bevacizumab toxicity and it provides new markers of drug safety for further evaluation.

Read full text in the Journal of Biological Chemistry

William Kraus and Svati Shah were part of a large collaboration that sequenced over 640,000 exomes from people in the US, UK and Mexico to estimate associations of rare coding variants with body mass index (BMI). They found that inhibiting GPR75 may be a therapeutic strategy for obesity.

Laura Svetkey, Chris Newgard, William Kraus and Svati Shah worked to identify metabolic biomarkers associated with beneficial metabolic changes to weight loss that identify individuals with obesity who would most benefit from a given type of intervention.

Read the full text in Nature

Nephrotic syndrome (NS) is a kidney disorder that causes the body to pass too much protein in its urine. Rasheed Gbadegesin and team conducted whole-genome sequencing on 320 individuals of unclear genetic etiology and analyzed data from several patient cohorts to gain insight into the genetic architecture of the condition.

Cindy Amundsen and Nazema Siddiqui collaborated with Oregon Health and Science University and the University of Alabama in Huntsville to compare the performance of several DNA isolation kits used in microbiome studies to see if recovered microbes identified by 16S rRNA sequencing differ based on the DNA isolation protocol.

Alterations in acylcarnitines, amines, and lipids inform about the mechanism of action of citalopram/escitalopram in major depression

The Proteomics & Metabolomics Core Facility and Jessica Tennenbaum were part of a large collaboration that used a targeted metabolomics approach utilizing a panel of 180 metabolites to gain insights into mechanisms of action and response to certain SSRIs used to treat major depressive disorder.

Christopher Newgard and Michael Freemark are part of an international team that is comparing metabolic effects of metformin and fermentable fibers in combination with those of metformin or fiber alone in adolescents with obesity. They will also determine if therapeutic responses correlate with compositional and functional features of the gut microbiome.

Read the study protocol in Trials

Raluca Gordan collaborated with Duke-NUS to develop the "Signature-QBiC" model that integrates signature profiles of mutational processes with the QBiC estimates of changes in binding affinity to investigate the effect of mutational signatures on the binding of 582 human transcription factors.

William Kraus and Beth Hauser were part of a large international team that performed GWAS studies for myocardial infarction to see if genetic factors that establish atherosclerosis may be distinct from those that predispose to vulnerable plaques and thrombus formation.

Paul Magwene, Joseph Heitman and team describe the genetic architecture of six traits in C. deneoformans and then used GWAS function-valued QTL mapping to identify genetic differences that underlie variation in those six traits. Their work illustrates the complex effects that variants may have with respect to virulence potential.

Several members from the Duke Center for Applied Genomics and Precision Medicine collaborated on a study that evaluated the performance of a host gene expression test to discriminate bacterial, viral, and noninfectious illness in immunocompromised patients. Although test performance was marginally lower than in immunocompetent patients, this approach may provide useful diagnostic information in this high-risk population.

Avshalom Caspi and Terrie Moffitt were part of a large, international team that used genetic correlation and polygenic score analysis to test if noncognitive skills influence educational and economic attainments and longevity and to investigate traits and behaviors that constitute noncognitive skills. They also conducted hypothesis-free bioinformatic annotation analysis with help from the Genomic Analysis & Bioinformatic core facility to explore the tissues, cell types and brain structures that might distinguish the biology of noncognitive skills from the biology mediating cognitive influences on educational attainment.

Geoff Ginsburg, along with Eric Perakslis, published a viewpoint in JAMA about the potential for digital health -- wearable and internal devices, sensors in people, homes, communities and more -- to improve health management. However, the current state of technology development and deployment requires a "buyer beware" cautionary note. Ginsburg was also interviewed by JAMA editor-in-chief Dr. Howard Bauchner.

Deepak Voora led a collaboration between the Center for Applied Genomics and Precision Medicine and the Department of Biomedical Engineering that developed a "muscle on a chip" platform to study the effects of statin associated musculoskeletal symptoms.

A team of researchers at Duke University led by Dr. Charlie Gersbach has developed a new method to discover gene regulatory networks for programming stem cells to become any cell type. Their work, published today in Cell Reports, demonstrates the potential of the approach in making mature adult neuronal cells, but is broadly applicable.

Researchers in the Center for Applied Genomics and Precision Medicine assessed the ability of transcriptomic biomarkers to identify naturally acquired respiratory viral infection before symptoms appear.

Read full text in The Lancet

A collaboration between DMPI, Division of Cardiology, Center for Applied Genomics and Precision Medicine as well as Regeneron Genetics Center and Vanderbilt Medical Center shows the large burden of undetected monogenetic cardiovascular disorders.