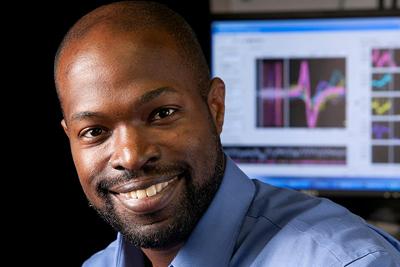 Dzirasa’s opinion piece that appears in the journal Cell this week is the fourth in a series on systemic racism, with the other pieces appearing in Cell, The Hill, and Neuron.

Inspired and motivated by the anti-racism efforts of individuals, groups, and institutions such as Duke in the past year, Dzirasa said he wrote the pieces for a variety of scientific and layperson media outlets because he wanted to reach a large and diverse audience at a critical time in national history.

The School of Medicine, in alignment with antiracism initiatives begun by Duke University and Duke Health, announced its “Moments to Movement” anti-racism initiative this summer and has launched a strategic planning process to dismantle racism and create a diverse, inclusive and equitable School and nation.
“This isn’t a new area of engagement for me,” said Dzirasa. “But now, the whole scientific ecosystem is listening. I felt that my colleagues needed to have a better understanding of the long history of structural racism in America and how history has led to this moment.”

In this week’s Cell article, “Revising the a Priori hypothesis: Systemic Racism Has Penetrated Scientific Funding,” Dzirasa writes that he benefited from what he calls ‘the pipeline’ that was created in the late 1900s to increase the number of Black doctors and biomedical scientists. At that time, several national programs were established to help Black scientists receive the education and resources needed to launch their scientific careers.

Dzirasa was motivated to pursue his MD and PhD degrees as an undergraduate in the Meyerhoff Scholarship Program at the University of Maryland, Baltimore County. Later, a NIH “Research Supplements to Promote Diversity in Health Related Research” awarded through a Conte Center grant led by Ranga Krishnan, the former chair of the Department of Psychiatry and Behavioral Sciences at Duke, helped him quickly set up his own lab. Nevertheless, he watched many of his colleagues run into major obstacles.

Black scientists do not receive the proportionate amount of scientific funding, scientific publications, and citation in scientific papers when compared with white scientists, said Dzirasa. A crucial study published in the journal Science in 2011 reported that Black applicants were 10 percent points less likely to receive NIH investigator-initiated research funding compared with whites, even after controlling for educational background, training records, previous research awards, and publication records.

“While my success served as an exemplar for our nation’s investments in building the pipeline, my experiences at each step in my education development revealed the fragility of the pipeline on which our nation had invested its hopes for equity,” writes Dzirasa for Cell. “Indeed, many of my black colleagues were not provided sufficient support to navigate all the obstacles that were rooted in a US academic system whose DNA encoded the insidious notion of black inferiority.”

In 2016, Dzirasa continued to investigate these statistics when he was appointed to a 17-person committee through the National Academies of Science, Engineering and Medicine. The committee was charged with providing recommendations to U.S. Congress about how to best support the nation’s young scientists.

For the committee’s report, Dzirasa followed up on the 2011 Science report and analyzed the next five years of data provided by the Office of the NIH Director. He found that the gap in funding for Black scientists remained.

“Given that the discrepancy in funding for black applicants persists after nearly 10 years of focused effort on the part of NIH, the a priori hypothesis that structural racism has somehow failed to penetrate our peer review systems is no longer tenable,” writes Dzirasa in Cell.

In a pre-print now available on bioRxiv, Dzirasa and 13 colleges examined whether discrimination occurs in scientific citation practices.

“In science, much of how we think about promotions and awards comes back to whether or not your papers are cited by colleagues,” said Dzirasa. “Yet, there are difference in how often people are cited across the field of neuroscience based on the presumed race and gender of the scientific authors.”

Dzirasa, who received both his MD and PhD at Duke, was encouraged to engage with public issues as a scientist by his former mentor, Brenda Armstrong, MD. Armstrong, who died in 2018, served Duke University School of Medicine for more than 20 years as associate dean for admissions and then as senior associate dean for student diversity, recruitment, and retention. She was the second black woman in the United States to become a board-certified pediatric cardiologist and was known for her efforts to lead civil rights and equality efforts at Duke and in Durham.

“As her students, many of us feel that she put the baton in our hands,” said Dzirasa. “The only way we can counter racism is with anti-racism. In order to change how things work, we have to take the time to educate our peers. I am running as fast as I can with the baton that Brenda handed to me.”