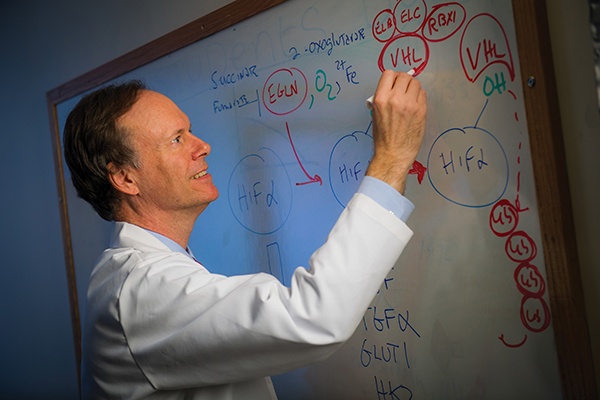 A Discovery That Comes Out of Nowhere

Please describe your responsibilities in your current role.

I run a research lab of about 10 to 15 people, most of whom are postdoctoral fellows. Our focus remains to understand why mutations affecting specific tumor suppressor genes cause particular cancers and to understand, based on the functions of those genes, how we might treat cancers bearing such mutations. We also continue to work on oxygen sensing and its role in diseases where there's an interruption in oxygen delivery, such as heart attack and stroke. I have recently agreed to be the scientific director of a new program at the Dana Farber Cancer Institute called the Lubin Scholar Awards, which will provide support for young physician-scientists who are training to be laboratory-based investigators. That's a cause very near and dear to my heart.

How did your time as a student at Duke University School of Medicine influence your career?

I received excellent clinical training at Duke medical school, and I had a number of clinical heroes and role models. Once I got on the wards in the second year of medical school, I could see why we had done all of the rote classroom learning during the first year, and that really re-energized me. All of that ultimately led me to decide to do a chief resident year at Johns Hopkins. I would also highlight the third year in the medical school curriculum, where I had the opportunity to work in a laboratory run by epigenetics pioneer Randy Jirtle, who was a fun-loving and enthusiastic mentor. That opened my eyes to the life of a research scientist, and it was a much more positive experience than the rather painful one I had as an undergraduate student working on a protein biochemistry project in a laboratory that was much better known for doing physical chemistry.

What is the major way that winning the Nobel Prize in 2019 has changed things for you?

I've tried to ensure that it doesn't change my professional life to any great degree. The biggest change is that I have to be a little bit more mindful of what I say and what I write because people pay a little bit more attention.

What are the biggest changes you see ahead for cancer basic and translational research in the next decade?

What's wonderful about science is the occasional discovery that comes out of nowhere and completely changes the way you think. I'll actually be rather disappointed if I'm correct in predicting the next big thing. So I'll cheat a little bit—this is a medical student trick—and I'll answer a related question. We always have a healthy back and forth between what I would call reductionist biologists who want to go deep on a particular question, versus what I'll call systems biologists, who seek a much broader description of a system, but without the same degree of depth. Both approaches have their strengths and weaknesses. But I'm hoping the pendulum swings back somewhat toward the reductionists, because I think in cancer biology the trend has gone too far in favor of the systems biologists who are using admittedly exciting technologies to describe cancer cells. But on one level we've been describing cancer cells for decades. To cure them, we need the reductionists to go in and do the mechanistic work. For example, seeing that a particular gene is highly expressed in a cancer doesn't prove that that gene is required by that cancer. We need to do experiments in model systems and silence the gene. If the cancer cells are still completely happy and able to form tumors and kill a mouse, then its expression may have been correlative but not causative.

Read About Other Alumni Making a Difference
in Cancer Research and Care: