Swimming against the Odds 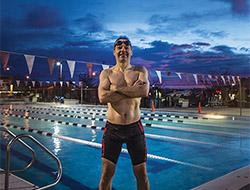 Growing up in Scotland, Gavin Maitland was intrigued by the 1979 movie Escape from Alcatraz, in which Clint Eastwood’s character breaks out of the notorious prison and eludes capture by making his way through the dangerous waters of San Francisco Bay.

One day many years later, Maitland slipped into the same cold waters off Alcatraz and began swimming toward a very different sort of freedom. Accompanied by his son, Zander, 13, and his daughter, Riley, 11, he swam from Alcatraz to the San Francisco shore in 2013 to celebrate his escape from the lung disease that had once sentenced him to a probable early death. The choppy water did not deter him from rejoicing the fifth anniversary of the lung transplant that saved his life.

“That was a very significant milestone in my life, because the average survival rate for
a lung-transplant patient is only five years,” says Maitland. It has now been 11 years since his transplant.

‘I Felt I Was Going to Die’

An athletic lifestyle has been always part of Maitland’s routine. He kept himself in excellent physical shape. He enjoyed running and swimming, and he had never smoked. When he was 35, Maitland ran the New York City Marathon. After he crossed the finish line, he developed a persistent dry cough. “I thought that maybe I had a cold or a flu,” he says. “I waved it away as an irritant.”

But the cough would not leave. Maitland consulted physicians in Denver, Colorado, where he lived at the time, who told him that it was probably just an ordinary cough, perhaps aggravated by asthma or allergies.

Over time, though, his symptoms grew worse. “I was coughing several hundred times a day,” he says. “I could barely have a conversation without coughing.” He developed severe breathing difficulties. His condition kept deteriorating, to the point where he could not breathe without oxygen therapy 24 hours a day. “Everything was a huge effort for me, even things like brushing my teeth, standing, and sitting,” he says. “I lost a lot of weight. I felt that I was going to die.”

Maitland sought help at a local hospital, where doctors took a biopsy of his lung. He was diagnosed with a very rare lung condition called idiopathic pleuroparenchymal fibroelastosis. This is an uncommon variant of idiopathic interstitial lung disease, which causes scarring in the lungs and the lining of the lungs. The scarring causes stiffness in the lungs and makes it increasingly difficult to breathe. At 41, Maitland was dying. His only hope was a lung transplant, but the doctors did not think he could survive the surgery.

His wife, Julie, refused to accept that assessment. One by one, she contacted 17 other hospitals in the U.S., trying to find a lung transplant center that would accept him. “They all turned me down,” says Maitland.

“Duke is one of the largest lung transplant programs in the world, with over 100 lung transplants a year,” says Palmer, professor of medicine and immunology, vice chair for research in the Department of Medicine, and director of respiratory research at Duke Clinical Research Institute. “We are experienced in operating on people that may be considered high-risk. Especially for a young man like Gavin, who would have died without a transplant, we thought that we could provide a good outcome, and he could benefit from a bilateral lung transplant.”

That was good news, but Maitland was far from out of the woods. Statistically, lung transplants have the worst outcomes of all organ transplants, and in any event no procedure could take place unless a suitable organ donor was found. Within a few weeks, a family stepped forward and donated their young son’s lungs, and Maitland put himself in the hands of the transplant team at Duke.

Moments after he woke up from the surgery, he took a big, deep breath into his new lungs. “I could immediately tell that my lungs were very good, and I could take this beautiful breath,“ he says. “It was a fabulous feeling.”

Maitland is deeply grateful: to Julie, who refused to give up; to the donor family, whose generosity gave him another chance; and to Duke, which gave him a future.

“Duke’s lung-transplant program saved my life. Without their willingness to go ahead and look at my case, I would not have survived.”

Do What You Enjoy Doing

Given a second chance at life, Maitland, who enjoyed competitive swimming while in high school and college, continues to participate in open-water swims to raise funds to support Palmer’s research on post-lung transplant. His recent adventures include the Great Chesapeake Bay Swim in Maryland; the Lady Liberty Swim in New York Harbor; and the Bridge-to-Bridge swim, a 6.2-mile course from the Golden Gate Bridge to Oakland Bay Bridge in San Francisco.

Last year, he published a book, Swimming through Adversity: Surviving a Lung Transplant, an inspiring account of his journey. Maitland donates proceeds from the sale of the book to Palmer’s research program and to other organizations that support lung research and increasing organ donation awareness. Thus far, he has raised over $17,000 for lung transplant research at Duke.

“I want to encourage other people and tell them that it is possible to survive a lung transplant, live well after that, and to be able to do what you really enjoy doing,” says Maitland.

Back to DukeMed Alumni News >