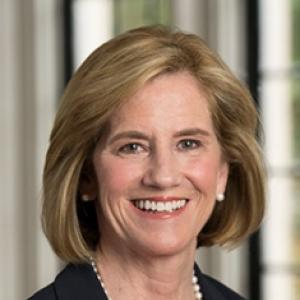 Dr. Klotman earned her undergraduate and medical degrees from Duke University. She completed her internal medicine residency and a fellowship in Infectious Diseases in the Department of Medicine at Duke before joining the faculty as assistant professor of medicine.  She joined the National Institutes of Health in 1991, where she was a member of the Public Health Service and trained and worked in the Laboratory of Tumor Cell Biology under the direction of Robert C. Gallo, MD.

Before returning to Duke in 2010, Dr. Klotman joined Mount Sinai School of Medicine where she was the Irene and Dr. Arthur M. Fishberg Professor of Medicine and served as chief of the Division of Infectious Diseases for 13 years. She was also co-director of Mount Sinai’s Global Health and Emerging Pathogens Institute, a program designed to translate basic science discoveries into clinical therapeutics for newly emerging and re-emerging infectious diseases.

A pioneering physician-scientist, Dr. Klotman’s research interests are focused on the molecular pathogenesis of Human Immunodeficiency Virus 1 (HIV-1) infection. Among many important contributions to this field, Dr. Klotman and her team demonstrated that HIV resides in and evolves separately in kidney cells, a critical step in HIV-associated kidney disease. Most recently, her group has been defining the role of integrase-defective lentiviral vectors for the delivery of an HIV vaccine.

Give to the Medical Annual Fund which provides the Dean with unrestricted funds for new and innovative programs.