Josh Huang, PhD: Shining a Light on the Traffic Signals in the Brain 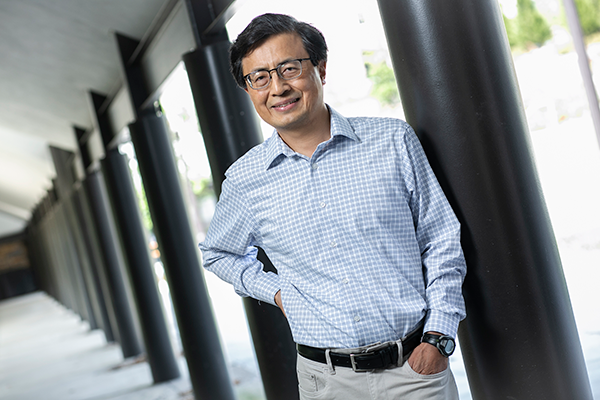 Think of the inner circuitry of the brain as a traffic network. When nerve cells release a signal, the information speeds along various routes to its destination: another nerve cell elsewhere in the brain. Without strategically placed stoplights, information could accelerate out of control, which can cause seizures. Inhibitory nerve cells act as the traffic lights that keep the nervous system in balance and route information flow.

“They are thought to have a unique function, enacting a ‘veto’ power to large neural ensembles in brain circuitry,” said Huang, who joined the Duke faculty as a professor in the Department of Neurobiology in August 2020. “But currently they are still a mystery. One of our major successes is that we developed molecular genetic tools that allow us to visualize and manipulate this fascinating cell.”

Scientists have long hypothesized that chandelier cells are involved in epilepsy and schizophrenia. To understand exactly what role they play in brain function and disorders, Huang needs to be able to visualize and explore them in the human brain.

He is developing a new generation of programmable cell engineering technologies to monitor and edit the function of diverse cells across multiple species, including human. In October 2021, Huang received a National Institutes of Health Director’s Pioneer Award to further this research.

He says he has found an ideal environment at Duke.

“As a basic scientist, the attraction and the motivation to come to Duke is to have a better link to the broad biomedical and engineering research community, especially translational and clinical scientists,” said Huang.

To support research and learn more about Duke Science and Technology, visit dst.duke.edu or email scienceandtechnology@duke.edu.