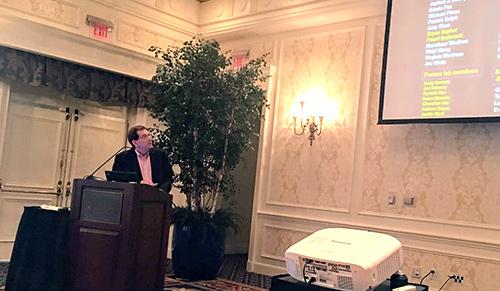 Scientists from diverse training and backgrounds, including neurologists, basic scientists, environmental engineers, and psychiatrists gathered from around the world at the Washington Duke Inn this May to find new ways to treat, understand, and, eventually, cure Parkinson’s disease.

“Parkinson’s disease is a complicated and devastating disease. Our goal was to bring together  experts with a variety of perspectives in order to spark innovation and new collaborations so that we have a better chance of success to help the millions of people impacted by this condition,” said Assistant Professor of Neurology Laurie Sanders, PhD, who organized the event, led a session on new therapies for Parkinson’s, and gave a lecture on possible biomarkers for Parkinson’s in genetic clinical trials.

The Duke Translational Symposium in Parkinson’s Disease and Neurodegeneration, held this May, featured faculty speakers from nine Departments within the Duke School of Medicine as well as 11 clinicians and researchers from Duke National University of Singapore (NUS).

Each brought their own perspectives and expertise from more than a dozen Departments within the School of Medicine and NUS. Duke NUS’s Suchun Zhang, MD, PhD, discussed his early experiments with stem cell therapies for Parkinson’s and how these therapies offer advantages over pharmacological and surgical treatments.

The Neurology Department’s Ornit Chiba-Falek, PhD, discussed her progress toward developing a next-generation therapy based on epigenome editing to treat Parkinson’s, and potentially, other neurodegenerative diseases. This approach would correct the overexpression of the SNCA gene that leads to many cases of Parkinson’s.

Sneha Mantri, MD, MS, meanwhile, shared her research that shows physical activity helps with symptoms of Parkinson’s more than previously thought and may even slow the progression of the disease. She also shared her ongoing investigations into factors that make individuals with Parkinson’s less likely to exercise.

And, in a keynote address, Al La Spada, MD, PhD, discussed the convergent pathways that connect Parkinson’s with other neurodegenerative diseases, such as Alzheimer’s, Huntington’s, and amyotrophic lateral sclerosis (ALS), from the misfolding proteins that are the root cause of all of these conditions, to age-related cofactors, to the potential development of “drug cocktails” that may one day synergistically prevent or slow neurodegeneration.

Parkinson’s disease is a movement disorder that causes involuntary tremor (movement), slowness, stiffness of the limbs, and balance problems. Symptoms progress over time and are more likely to occur with age. Treatments can help with symptoms but cannot cure it or slow its progression. Nearly one million individuals in the United States have Parkinson’s, with men slightly more likely than women to develop the condition.

The partnership between Duke and the National University of Singapore began in 2005, when the institutions partnered to establish a new medical school in Singapore. This partnership was extended in 2016 to include collaborative academic and medical research between the two organizations.

“This symposium represents a unique opportunity to bring together multidisciplinary faculty from both institutions to discuss a rapidly evolving area that has the potential to significantly advance patient care,” said Daniel Laskowitz, MD, MHS, Professor and Vice Chair of Neurology, and translational research liaison for the Duke-Duke-NUS partnership. “Our hope is that the discussions and relationships formed at this symposium will lead to institutional research collaborations, which may also be facilitated by Duke-NUS collaborative research grants that are offered at regular intervals.”

Read more about these collaborations at the Office of Duke-NUS Affairs.

This effort was part of the Translating Duke Health Initiative, a multi-disciplinary, multi-year commitment to harness the Duke's expertise and knowledge to address society’s most significant scientific and healthcare challenges and fulfill the vision of making discoveries and transforming health for millions.

This article was originally published by the Department of Neurology

Unraveling the Mysteries of the Immune System