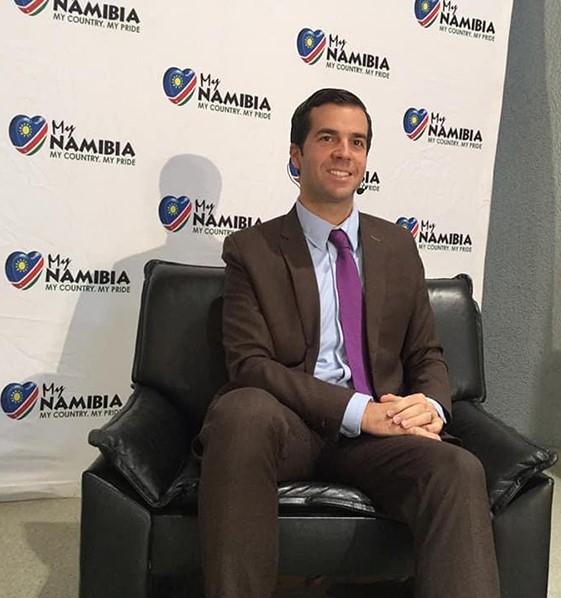 Eric Dziuban, MD’07, the Centers for Disease Control and Prevention’s country director for the southwest African nation of Namibia, was enjoying a weekend at the coast with his family when the call came. A Romanian couple who had recently arrived in the Namibian capital of Windhoek from Spain had fallen ill. Tests confirmed everyone’s fear: COVID-19 had finally come to Namibia.

“We grabbed the kids, threw everything in the car, and drove back to the capital to start our emergency response,” says Dziuban, whose office works closely with the Ministry of Health and Social Services and oversees the CDC’s public health programs in Namibia.

COVID-19 was late arriving—nearly two months after the first cases appeared in the U.S.—and for a long time it looked as if the deadly coronavirus might let Namibia off lightly. After those first two cases, a handful of others cropped up over the next few weeks. By early April, 16 cases had been confirmed. And then they stopped.

“We had no new cases for 45 days,” says Dziuban, who has been in Namibia directing the CDC’s operations there for almost three years. “The government imposed strict lockdown after the first eight cases, and it worked. The more time that went by, the more confident we were that we had in fact interrupted transmission. But the numbers in our neighboring countries were skyrocketing, and we knew it was just a matter of time. We knew we couldn’t keep it out forever.”

THE VIRUS GAINS A FOOTHOLD

Dziuban was right. Namibia imports large quantities of food and other goods across its borders with other countries, especially South Africa directly to the south, which was battling a rapidly climbing COVID-19 caseload. Trucks transporting goods across the border eventually brought the coronavirus back as well. And this time, despite the re-imposition of lockdown measures, once it had a foothold, it was there to stay.

For Dziuban, that has meant months overseeing emergency operations in conjunction with his Namibian colleagues, advising the government on policy, implementing infection prevention and control protocols, and helping increase the availability and effectiveness of testing.

“I’ve certainly learned a lot more about molecular diagnostics than I ever knew before,” says Dziuban.

“Lab capacity was minimal at the beginning,
and we could only do about 20 tests per day.
Now we’re over 1,000. For a country this size,
that’s a pretty remarkable improvement.”

"It’s in situations like that where we felt we could add the most value, but it’s required some of us to get out of our comfort zones. I’m not a trained laboratory scientist, so there are a lot of things I’ve had to learn alongside our colleagues here,” says Dziuban.

‘A COUPLE OF LIFETIMES AGO’

Dziuban came to Duke from his home state of Michigan and focused on pediatrics, ultimately finding his sweet spot at the intersection of pediatrics and public health.

“At the time, just moving from Michigan to North Carolina felt like a big adventure,” he says. “I had a great experience at Duke. I learned a lot about myself and built some strong bonds. That feels like a couple of lifetimes ago now.”

He did a fellowship at the CDC in Atlanta for his third-year research project, and after graduation and a pediatrics residency he joined a program providing HIV care for children in Eswatini, formerly known as Swaziland, in Africa. Eight years ago, he returned to the CDC, and when the country directorship in Namibia came open, he jumped.

Eric Dziuban and his wife and sons are in 'family lockdown,' leaving the house only for necessities, during the COVID-19 pandemic.
​

“My wife and I consider Namibia our home,” he says. “Our two little boys love it. They get to experience a lot of things they wouldn’t get in the U.S. When COVID broke out, there was the opportunity for people working for the U.S. government to return to the U.S., but we felt the right thing to do was stay here and help guide the country’s response.”

Dziuban credits the Namibian government with being proactive and transparent in dealing with the crisis, especially given its extremely limited public health resources; everything from trained health care workers to basic supplies like medical oxygen is in short supply. Many people live together in close quarters, and lockdown measures take a steep economic toll on many families that rely on limited incomes.

“Namibia has a long struggle ahead of it,” says Dziuban. “There’s a lot that can be done even with limited resources; good public health decision-making doesn’t have to be expensive. But resources are definitely a limitation. We’re all waiting for a safe and effective vaccine, but we know that even when that happens it will take some time for it to get on the ground here. There is hope at the end of the tunnel, but we’re realistic about how long that tunnel is.”