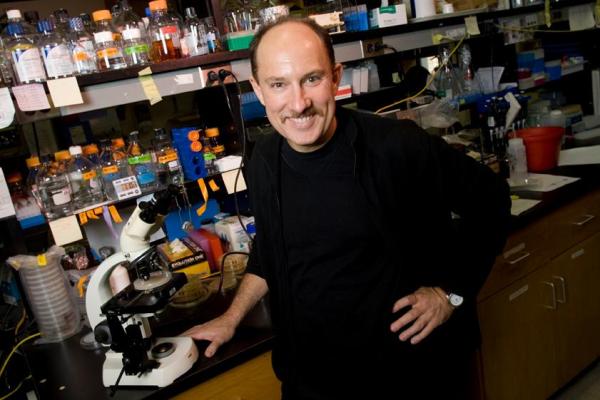 Drug-resistant microbial pathogens — whether parasite, bacteria, virus, or fungus — are a major global challenge that can lead to limited treatment options, increased costs for resources, and higher levels of morbidity and mortality.

A Duke-led international research team has discovered one of the ways that drug resistance can develop: a process by which mobile DNA sequences called transposons trigger “hypermutation,” allowing certain genetic components to multiply unchecked.

Joseph Heitman, MD, PhD, chair of the Department of Molecular Genetics and Microbiology, along with graduate student Shelby Priest, PhD; Paul Magwene, PhD, professor of biology; and colleagues collaborated with a team from Ruhr-Universität Bochum (RUB) in Bochum, Germany, to investigate how the fungus Cryptococcus neoformans becomes resistant to antifungal drugs. Their results were published in Nature Microbiology on August 2.

C. neoformans is a yeast-like fungus, found in the environment all over the world, that can infect people following inhalation. While most people who are exposed do not become sick, the fungus can cause pneumonia-like symptoms for those with weakened immune systems, especially those with advanced HIV/AIDS, and in some cases can disseminate to cause life-threatening infections of the brain. Antifungal drugs taken for at least six month can treat C. neoformans, but in some cases, the fungus develops drug resistance.

Mutations can make microbes more competitive and generate variation in populations that enable evolution, but they have to strike a happy medium: too little variation can lead to evolutionary stagnation, which can lead to being outcompeted in their environmental niche or even becoming extinct. Too much variation, though, is also dangerous because it increases the chances that something major could go wrong to an essential gene product, and that can potentially lead to disease or worse if left unchecked.

“When DNA is replicated by a polymerase, the polymerases have an intrinsic error rate,” Heitman said. “If they are too accurate, they are too slow, so it’s a trade-off between speed and accuracy.” Typically, internal mechanisms can correct those errors, but hypermutators can form if there are defects in these pathways. ”

Using polymerase chain reaction (PCR) testing, the team discovered instead that these hypermutators are caused by insertions of transposons into genes. Also known as “jumping genes,” transposons are DNA sequences that can change their position in the genome and affect the function of the genes into which they insert. If a transposon jumps into a gene that is critical for susceptibility to a drug, this can result in drug resistance.

In this case, a mutation occurred in an RNAi component, a system which normally keeps transposons in check. Instead, the mutation caused the strain to lose its RNAi, allowing hundreds               to thousands of copies of one particular transposon called Cnl1 to accumulate in the genome. “This produced a huge burden,” Heitman said. “They have an extra one million base pairs in their genome that comes from the extra copies of Cnl1.”

The unchecked movement of these extra copies led to drug resistance.

This process might be more common than first thought. In the fungal kingdom, the ancestral fungus had RNAi, but now many fungi have lost their RNAi machinery. “One outcome is that they can harbor a double-stranded RNA virus that makes them more competitive,” Heitman said, “and that makes them even scarier to other microbes.” Other examples of RNAi loss that lead to hypermutation likely remain to be discovered, based on these findings.

It’s unlikely that scientists will be able to stop these mutations or eliminate these lineages, but being able to genotype a specific location in the genome of C. neoformans could help inform treatment options to overcome drug resistance. “By identifying genes and natural genetic variation, and genetic variance that could contribute to hypermutability” Magwene said, “we can identify potential lineages that might show increased rates of drug resistance and may be able to modify clinical treatment in the future.