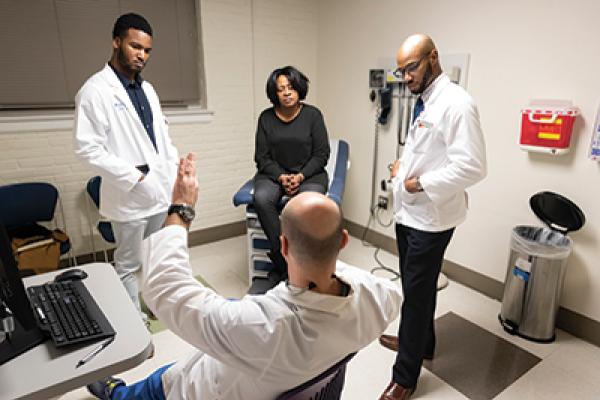 New Program Gets Medical Students Off Campus and into the Community

Maya Torain first stepped onto the Duke campus as a medical school student two years ago, but she was no stranger to Durham. As a child, the Baltimore, Maryland, native spent her summers in Durham visiting her father’s family. Years later, even though she was attending medical school right in her father’s hometown, she says she felt as though she were in a bubble, far removed from the town she remembered. She was eager to get out and serve the local community.

“You can go months and months without really even interacting with the Durham community,” she says.

Torain, now a third-year student, isn’t the only Duke medical student to have felt disconnected from Durham. That’s what drove her and three other third-year students—Peter Callejo-Black, Nathaniel Neptune, and Deborah Oyeyemi—to work with administrators to create a Duke University School of Medicine elective course that takes students out of the hospital and into the community.

As a part of the Holton Leadership Elective, third- and first-year students see patients at the Holton Wellness Center two nights a week. One of three neighborhood health clinics operated by the Department of Family Medicine and Community Health, Holton offers a medical home for many residents in East Durham. The clinic, which is within walking distance for most patients, provides services including family planning, management of chronic conditions such as diabetes and high blood pressure, and routine immunizations. Patients—many who are uninsured or underinsured—pay based on income.

Now in its second year, the course gives Duke medical students the rare opportunity to work at a community clinic in Durham. While all students perform clinical rotations during their second year, most rotations are done in the hospital or in an outpatient setting, such as an obstetrics and gynecology office. Few students have the chance to work in a community health clinic like Holton.

“I think when you practice at the hospital, you see a very specific patient population, and you don’t see necessarily how they exist in the real world,” Callejo-Black says. “Holton Clinic is definitely immersed in the community.”

The interaction serves as a learning opportunity for all the students, with the third-year students honing their mentorship skills—which will prove useful later in their residencies—while the first-years get to put their classroom skills into practice and build confidence interviewing patients well before their second year.

“As the weeks go on, they become more and more independent,” Oyeyemi says of the first-year students. “It goes from the third-years teaching to more supervising, and having the first-years take ownership of the interaction.”

The students also learn valuable lessons about what it is like to be part of an interdisciplinary team and gain firsthand experience working with an advanced practice provider like Mosu. A family nurse practitioner, Mosu runs the clinic alongside a physician assistant. Neptune says he has found it helpful to see how much Mosu knows about his patients’ lives outside the clinic. For example, Mosu knows whether a patient is likely to take medicine they struggle to afford or if lack of transportation might make it difficult to return for follow-up appointments. “He’ll find ways to still treat them and find the best way to meet their goals,” Neptune says of Mosu. “He’s truly entrenched in this community.”

Ultimately, the students hope to expand the Holton course by adding more clinic nights or offering it at other community clinics so more students can participate.

At Holton, the students are allowed to spend much more time with the patients than the typical 15 minutes allotted for clinic visits, which means more time for patient education. Mosu recalls a patient with high cholesterol. The students were able to spend nearly 45 minutes with her, thoroughly answering all of her questions.

“I would have given the patient the pamphlet and talked briefly about cholesterol,” Mosu explains. “The students were able to talk to the patient all the way down to the molecular level. They were able to explain all the nuances of hyperlipidemia.”

Neptune adds: “Sometimes the patient is apprehensive. But then at the end, they say, ‘Oh, I’m not an experiment. I’m not here getting subpar treatment. I’m actually receiving more care than I would have in a typical visit.’”

Although the course was created with students in mind, the patients weren’t an afterthought, says

Michelle Lyn, AB’89, MBA, MHA, chief of the Division of Community Health and a faculty advisor for the course. In organizing the course, the students considered the community’s needs first. “It wasn’t just about going and doing a rotation in yet another location,” Lyn says, adding that the students asked themselves, “Why are we there? Why is the clinic there? What are all of the factors that patients face?”

That mindset of putting patients first has led the students to partner with other groups in the community, including the Benefits Enrollment Center, which provides assistance to elderly patients at Holton and other clinics in the area. The students also hope to start a program to help address hunger issues among the elderly in Durham.

“The students have a very healthy perspective on community engagement,” says Fred Johnson, MBA, vice chief of the Division of Community Health. “They recognize that the neighborhood is going to be there after the students leave, and that they’re not going to just run in and run out.”

Back to DukeMed Alumni News >