Growing up in a small town in the heart of South Carolina, Anthony Viera, MD, MPH, knew from an early age exactly what he wanted to be when he grew up: a country doctor. Bamberg, South Carolina, has a population just a little over 3,000, and those who aren’t related are at least acquainted.

“As a boy growing up in a rural community, I set my heart on becoming a simple country doctor; that was the kind of doctor who I had seen in my community, who was really inspirational to me,” said Viera, professor and chair of Duke’s Department of Family Medicine and Community Health. “And complementing that was my fascination with TV’s country doctors of the time — like Dr. Baker from ‘Little House on the Prairie’ and Bones from ‘Star Trek.’ I really admired their commitment to care for the folks in their community, wherever that happened to be.”

Although Viera now lives in the bustling Triangle region of North Carolina — hardly a small town — and works in a major academic medical center, he gets to fulfill his dream in another way: by equipping young physicians in his department with the skills and training needed to practice in rural areas. The Department of Family Medicine and Community Health’s new Rural Training Track of the Family Medicine Residency places residents in rural communities in North Carolina during the second and third years of their training, allowing them to experience firsthand some of the challenges and opportunities of rural medicine.

The placement helps residents to fully “spread their wings” as physicians, performing procedures and making medical diagnoses or performing procedures that might be referred to a specialist in a more urban environment. They learn firsthand the issues that people living in rural communities can face, such as social isolation, limited opportunity, and a lower socio-economic status. But they also learn about the joys of small-town life: less traffic, a slower pace, blissful moments of calm and quiet, and knowing and caring for your neighbor.

Attracting young up-and-coming physicians to practice in rural areas has historically been difficult, according to John Anderson, MD, MPH, chief medical officer for Duke Primary Care and an associate professor of family medicine and community health.

“A lot of our physicians coming out of training have done their residencies in urban settings. Some have young families. They want to be in more urban areas where there is access to better grocery stores, restaurants, and schools,” said Anderson. “The perception is that it’s going to be a little more challenging to live in a more rural area. Of course, I would argue that there are lots of advantages to being rural.”

Anderson would know. Since 1983, he has lived and worked in Oxford, North Carolina, a quaint town of less than 10,000 people located just forty minutes north of Durham. Anderson is a primary care physician at a Duke Health satellite clinic, Duke Primary Care Oxford. He came to the clinic around the same time as colleague Tom Koinis, MD, MSE, primary care physician and consulting associate of family medicine and community health. Koinis now serves as the program director for the rural track.

Both were passionate about rural medicine and had recently completed residencies at Blackstone Family Practice Center, part of the Medical College of Virginia’s family medicine training program.

“Tom and I came from a program very similar to what we are establishing with the rural track program,” said Anderson. “It was one of the first programs in the country that utilized this combination of spending over a year in an academic medical center and then two years out in a community-based program.”

Over the years, Anderson and Koinis worked occasionally with family residents interested in the Oxford practice, but they longed for a more formal training program similar to the one they had completed. They reached out to Viviana Martinez-Bianchi, MD, FAAFP, associate professor of family medicine and community health and then the department’s residency director. They also contacted administrators at Maria Parham Health, a Duke LifePoint Hospital in Henderson, North Carolina.

“There was a lot of excitement from the start,” said Bert Beard, chief executive officer of Maria Parham Health. “Duke is at the cutting edge of medicine, and one of the next great challenges to our industry is delivering high-quality care to rural and underserved populations.”

The group’s early discussions grew legs when Viera came to Duke from UNC in 2017. One of the first crucial moves he made as department chair was to begin planning for the expansion of the residency program, and this included the hire of Greg Sawin, MD, MPH, associate professor of family medicine and community health, in 2020. Sawin came to Duke from Tufts Cambridge Health Alliance, where he served as residency program director of the Cambridge Excellence Program. He has a longtime passion for working with underserved populations.

“Social justice was the driver of what brought me into medicine in the first place, and so trying to figure out how to meet needs for underserved populations has been kind of the north star of my career,” said Sawin, who has worked with a variety of underserved populations, from the rural Appalachian poor to urban-dwelling immigrants. “Coming to Duke to help launch a rural health track established to meet the needs of rural North Carolinians, to improve health access, was an obvious fit.”

Sawin wasted no time pushing the track forward. During the summer of 2020, he applied for and secured a three-year $750,000 grant from the Health Resources Services Administration to establish the training program and fund the first cohort. In Fall 2020, the department was able to recruit and match two new residents with a passion for rural medicine, with the goal of eventually bringing in four-person cohorts each year, a requirement for further funding. 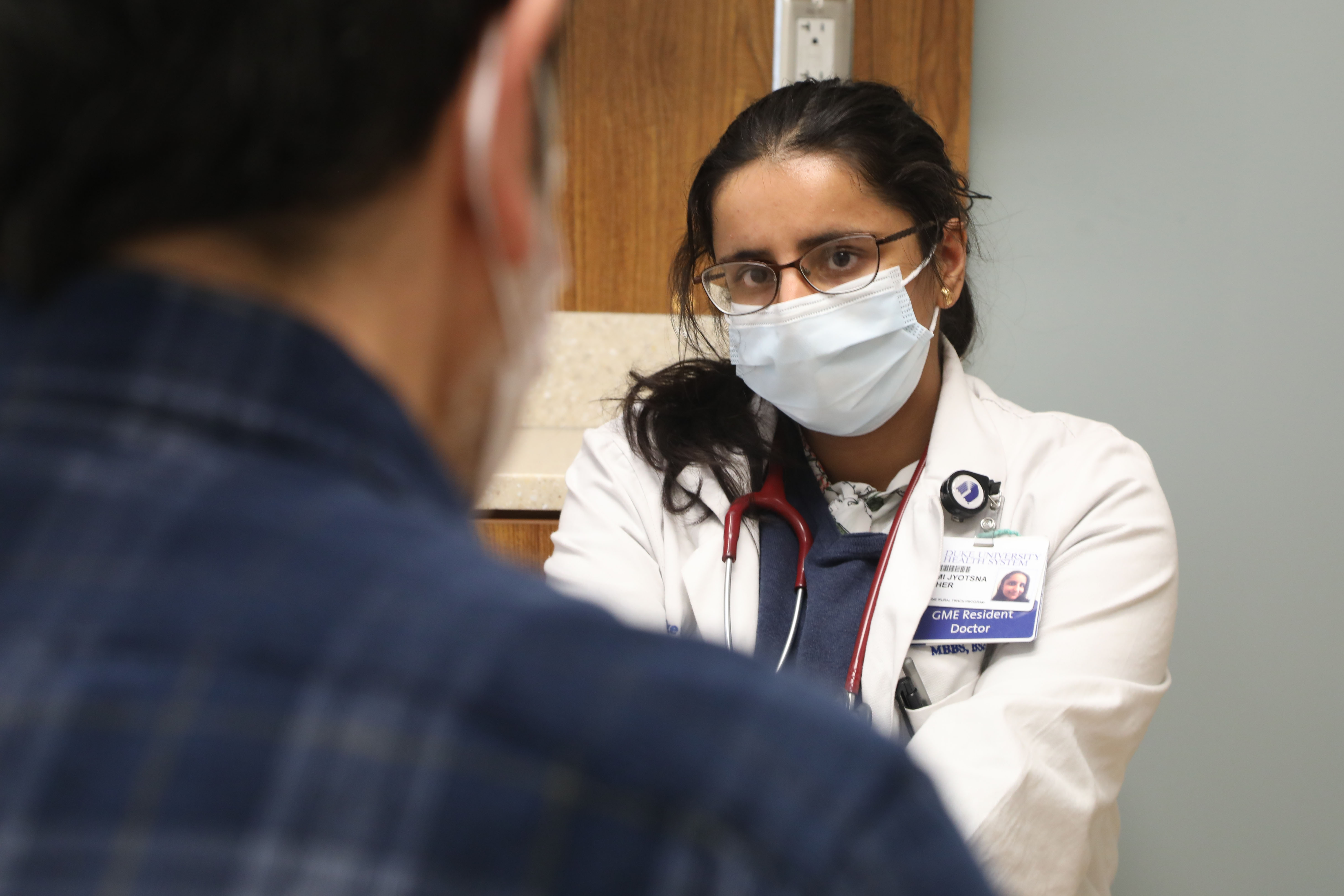 Rashmi Saincher, MBBS, and Jessica Yeary Sanders, MD, embarked on the Rural Training Track in Fall 2021. Saincher attended medical school at St. George’s University in London. She grew up in Langley, Canada, a small town outside of Vancouver, and this instilled in her a love for rural life.

“I am intensely interested in creating a career combined with clinical and academic medicine by serving the rural community,” said Saincher. “I want to create a larger spotlight on rural medicine and its rewards and see if we can organize more medical students to rotate in these underserving but rich communities. I felt this program would be an excellent stepping stone for my ambitions while also improving my own skills and, of course, indulging in my love of the countryside.”

Sanders grew up in Houston, Texas, and attended medical school at the University of Texas-Houston McGovern Medical School. She, too, was specifically interested in training at a rural family medicine program.

“During interview season, I attended a virtual meeting in which Duke's program directors introduced their new rural program,” said Sanders. “Everyone was so kind, and they each had a long history with Duke. I loved the idea of being able to train at Duke facilities in both the Durham area and its smaller outlying communities.”

Ronald W. Stahl, MD, chief medical officer at Maria Parham, says he is honored to have been involved in the development of the Rural Track Training Program over the past four years. “The energy, focus, and drive to bring this program to fruition has been incredible,” said Stahl. “And to end up with the quality of residents we have for our first class speaks highly to the quality that is perceived for this residency. Helping to put together this residency, which is designed to address the lack of primary care in rural areas, has been extremely rewarding.”

Beard is delighted that Duke residents will have a more formal role and home at his hospital. “As North Carolina has the third-largest rural population in the country, it makes natural sense for Duke to innovate here, with a trusted partner,” he said. “This is the start of something big that could have far-reaching implications with Duke behind it. We are ecstatic to be a part of it and look forward to helping facilitate its growth and evolution.”

“I want to instill in our residents the value that full-spectrum training in family medicine can bring to a community. It really can make a difference,” said Viera. “Family medicine is about relationships, and trust-building between doctors and patients. In the end, that trust is what can help us work toward better health outcomes in these small, unique communities.”

Lindsay Key is a freelance writer in Durham. She was previously the senior science writer for the School of Medicine and editor of the online magazine Magnify. Photos by Jim Rogalski.