Snakebites and Terabytes: How a Duke Data Scientist is Helping Brazil Get Antivenom Where It’s Needed

The attack came swiftly, as if from nowhere. The man had been working outside his house, in a small community along one of the many rivers that twist through the Amazon forest in northwestern Brazil. He was barefoot, feeling no unease. And then — a rustle in the brush, a flash of slick brown skin and a jolt of pain in his left foot.

It was over in seconds. But the man’s ordeal was just beginning. 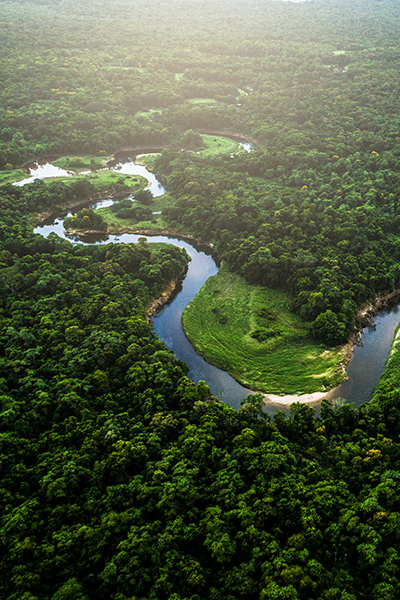 Having spent his life fishing and farming in the Amazon, home to as many as 17 different kinds of venomous snakes, the man understood the perils of the forest. He had been bitten before. Eight times, in fact. The worst, in 2003, cost him part of his right leg and put him in a hospital for a month.

The man’s best hope for avoiding another disabling injury was antivenom, a time-dependent medication that can halt, but not reverse, the effect of a snake’s venom. Every minute that passes without treatment increases the likelihood of permanent tissue damage, organ failure, or death. He needed to get to a hospital — fast.

But the Amazon is not built for speed. Few roads extend beyond Manaus, the region’s largest city and site of one of its few hospitals equipped with antivenom. The man’s village was more than 180 miles away. He would need to travel an hour by canoe to reach the nearest road, then catch a bus to Careiro de Varzea, a smaller city across the river from Manaus. From there, he’d take another boat and meet his son-in-law, who would drive him to the hospital.

After eight agonizing hours, the man finally arrived at the hospital. Doctors administered antivenom and performed surgery. They managed to save his foot, but he had already lost substantial muscle and tissue, and he was left with a permanent injury. The venom had too much time to do its harm.

While the man was lucky to escape with his life, his frantic race to seek treatment is an all-too-common scenario for people living in the world’s most remote regions, surrounded by environmental dangers but cut off from emergency medical care.

For João Ricardo Nickenig Vissoci, PhD, a Duke assistant professor of surgery and global health who studies such incidents, what makes these stories even more devastating is that they shouldn’t happen at all — particularly not in Brazil, where antivenom is ample and free to patients through its national health care system.

There is just one problem, Vissoci says: It’s in the wrong place.

Vissoci, who grew up in Maringá, a city in Brazil’s southernmost corner, is no snake expert. And despite his position in the School of Medicine’s emergency medicine division, he’s not a clinician, either.

His niche is in research methodology, in devising clever ways to synthesize and analyze data. Give him a few terabytes of hospital records and he’ll shake loose meaningful insights about how well a system is functioning.

Since coming to Duke as a postdoctoral fellow in 2016, Vissoci has built geographic information systems (GIS) to map patterns on where road accidents occur in Tanzania, part of research to improve treatment of traumatic brain injury. He has identified gaps in the availability of surgical care in India and helped inform strategies for distributing COVID-19 vaccines to remote populations in Brazil. Last year, he and emergency medicine colleague Catherine Staton, MD, launched the Global Emergency Medicine Innovation and Implementation Research Center, a multinational group of researchers working to improve clinical care through such data-driven analyses.

“I really like to be the person that someone goes to when they have a difficult research question,” he says. “Honestly, if you came to me with a question about building houses, I’d be fascinated by that. It’s the underlying methodological structure that I enjoy.”

With snakebites, Vissoci has found a problem knotty enough for his approach — but also a potential way to help his native country address a vexing gap in its national health care system. Since the development of antivenom in 1895, deaths and serious injuries from snakebites have become relatively rare in much of the world; in the United States, for example, between 7,000 and 8,000 people suffer snakebites each year, but only an average of five die as a result. Yet an encounter with a venomous snake remains uncommonly lethal in remote parts of northern Brazil — and indeed in many of the places that harbor the most dangerous snakes.

According to estimates by the World Health Organization, between 81,000 and 138,000 people around the world die each year after being bitten by venomous snakes, and another 400,000 suffer permanent disabilities. More than 90% of those incidents occur in low- and middle-income countries in Asia, South America, and sub-Saharan Africa.

“Antivenom has been around for over 100 years, and yet there remains this gigantic gap between efficacy and effectiveness,” says Charles Gerardo, MD, chief of the School of Medicine’s emergency medicine division and an expert on snakebites who is co-leading Vissoci’s research.

In some places, lack of access or funding for antivenom may contribute to that gap, as does widespread reliance on alternative remedies, such as traditional or herbal healing. While usually harmless, such methods often deter or delay people from receiving antivenom, Gerardo says.

In Brazil’s northern forests, Vissoci is working to overcome a more systemic barrier to timely treatment of snakebites: geography. While Brazil is one of the world’s leading producers of antivenom, the medication is generally available only in larger, metropolitan hospitals — in other words, not where the snakes are.

When you factor the difficulty of travel from remote parts of the Amazon, Vissoci says the medication is literally out of reach for those most likely to need it. Even those who make it to a hospital often don’t arrive in time for treatment to be most effective.

“The people who most need treatment for snakebite are generally not getting it,” he says. “You can have all the antivenom in the world, but if you can’t get it to people, it’s useless.”

Intuitive as that may sound, it was not well documented until Vissoci and his collaborators did some serious data mining. In 2019, he worked with Wuelton Moreira, PhD, and Jacqueline Sachett, PhD, from the Fundação de Medicina Tropical in Manaus and Fan Hui Wen, MD, Ph.D., from Brazil’s Butantan Institute to collect stories from snakebite patients who turned up at urban hospitals. Few of them had access to transportation when they were bitten. Many had to walk to seek help. Most hitched rides on motorcycles or boats to reach a hospital. One multi-legged journey covered more than 500 kilometers (310 miles).

In about 30% of cases, patients didn’t reach the hospital until six or more hours after being bitten. The longest gap was 96 hours. But even a delay of just three hours increased the chances of permanent injury by 56%, Vissoci says.

Vissoci loaded the data into a GIS to estimate how long it would take to reach a hospital from various points in the Amazon. The analysis confirmed what patients had told him: If you are bitten by a snake in many parts of the Amazon, the medication that could save you is likely three or more hours away.

Obviously, you can’t move the snakes. But what about moving the antivenom? It’s a deceptively simple idea, but one Vissoci thinks just might work.

Vissoci emphasizes that Brazil gets a lot of things right in how it deals with snakebites, particularly its impressive in-country production of antivenom and its commitment to make it free to patients. But his data-crunching shows how easily a simple disconnect – in this case, a mismatch between where care is needed and where it’s available – can undermine such carefully planned advantages.

With Gerardo and Brazilian colleagues providing clinical guidance, Vissoci is developing a plan to relocate at least some antivenom to local community health centers, which are the backbone of Brazil’s tiered health care system. These primary care centers cover about 90% of Brazil’s geography, making them much more accessible to people in sparsely populated areas.

But moving antivenom isn’t as straightforward as it seems. “Antivenom is not at all a simple medication,” Gerardo says. It is given intravenously, and some patients experience complications that require advanced clinical responses. Clinicians will need to be trained not only on how to give the medication, but how to spot and refer cases needing specialized care, he says. It will also take time for residents to know and trust treatment closer to home.

“So we’re not just looking at antivenom distribution,” Gerardo adds. “The training and education pieces are all part of the care package.”

Meanwhile, Vissoci and postdoctoral researcher Thiago Rocha, PhD, have designed a toolkit of GIS-powered dashboards that will provide officials with real-time data on where snakebites occur and where medical resources may be needed. The beauty of those tools is that they can be adapted for other countries and health issues, from scorpion stings to heart attacks to COVID-19 vaccinations.

The Need to Do Better

The methodologist in Vissoci can geek out at length about the structure and dynamics of such systems. But when he talks about snakebites — and the opportunity to give back to the country that trained him — it’s clear this project resonates on a deeper level.

“There are people suffering because we don’t have the resources in the right place, and that really touches me,” he says.

He shares the story of another patient researchers met at the Fundação de Medicina Tropical, a 12-year-old boy facing a brutal decision.

The boy had suffered a snakebite on his left foot seven years earlier while walking in an indigenous village deep in the forest. Not until hours later, when the wound appeared to be getting worse, did the family seek medical care. He was given antivenom some 12 hours after the bite, but he had already lost significant tissue and muscle.

Now, on the cusp of adolescence, his damaged foot could no longer support his weight. Doctors were recommending that it be amputated.

“I can only imagine the pain and the impact this event could have caused for this kid,” says Vissoci. “This is a life that will be scarred forever. We just can and need to do better. In the end, it is about the lives and reducing suffering.”

Michael Penn is director of communications, marketing, and alumni relations at the Duke Global Health Institute.