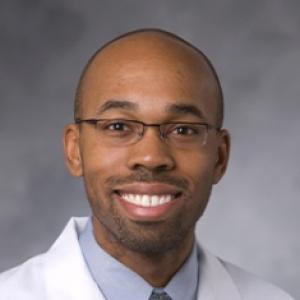 Dr. Joseph A. Jackson, Jr. is an Advisory Dean in the School of Medicine and Associate Professor in the Department of Pediatrics, Division of Primary Care.   He was raised in Yardley, Pennsylvania and received both his Bachelor of Science in Chemistry and his MD from the University of Virginia.  He completed his pediatric training at Duke University hospital and joined the Duke faculty in 2007.

Dr. Jackson is an educational leader in the Health Professions with a track record of successful implementation of innovative teaching curricula. He served as Associate Director for the Primary Care Leadership Track program helping to establish Duke’s first Longitudinal Integrated Clerkship for students interested in primary care. He also served as Associate Director and Academic Advisor for the Master of Biomedical Sciences program housed within the School of Medicine.   He is an educator at heart and has a passion for implementing learning opportunities for both students and faculty.  Given his interest in professional formation, he serves as Co Director for a course entitled, Essentials of Health Practice and Professional Development.  He also leads Faculty Development initiatives in his role as Vice Chief of Education for the Pediatric Division of Primary Care.

Dr. Jackson’s scholarly interests are focused on professional identity formation across the health professions training continuum.  As a clinician educator his curiosities are fueled as he explores the developmental progress of his learners over time.  He is similarly motivated and inspired to track the development of his pediatrics patients in his clinical practice.  He has a track record of excellence both as a clinician and educator and was awarded the Duke Health Professionalism Award in 2017.  He was also selected as a 2019 Scholar for the American Pediatric Association Education Scholars Program.

Described in the Herald Sun Newspaper as a “Father of Five (now six) and Pediatrician of Many,” Dr. Jackson’s greatest passions are stirred as he interacts with his family, his patients, his learners and his colleagues.