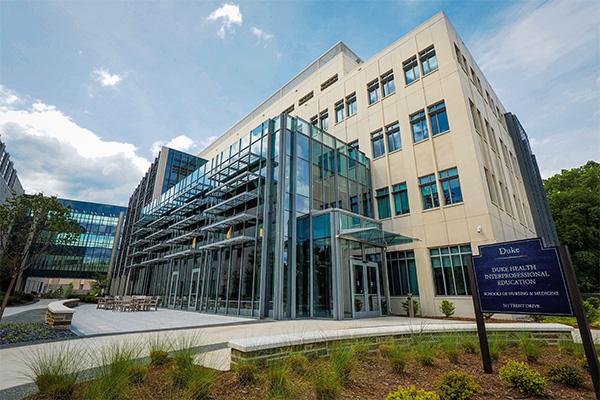 Women’s reproductive health encompasses a continuum of a woman’s lifespan. While a woman’s health is genetically determined by the DNA she inherits by her parents, it is also shaped by her environment and life experiences. Reproductive health can refer to the function and health of reproductive organs, the ability to conceive, give birth and raise a child, disease development, physical and psychological well-being, and environmental impacts on health before and during pregnancy.

Five Duke experts addressed a number of these topics on Feb. 2 as a part of Research Week 2022.

On the Importance of the COVID Vaccine in Pregnant Women

“One of the most important conduits for the function of the placenta is the active transport of maternal antibodies, which is referred to as passive immunity during pregnancy. This is why vaccinations in pregnancy are so critical, because many of the antibodies transported across the placenta and delivered to the fetus help develop the fetal immune system, such that when the fetus is delivered, it has protective antibodies.”

On How COVID Affects the Placenta

“Most viruses do not actively infect the placenta. In fact, a lot of damage that’s caused through infections in pregnancy — even from viruses that can induce a congenital disease or abnormality in the developing fetus — are often the maternal immune response to that infection instead of active replication of the virus. There have been very few reports of evidence for active replication in the placenta from coronaviruses, but it’s the exception rather than the norm. The placenta by and large is doing its job to protect.”

Jonathan Posner, MD, vice chair for research and instructor in the Department of Psychiatry and Behavioral Sciences

“A study was recently released from a group in New York who enrolled women who had coronavirus during pregnancy. The researchers are following the women’s babies for the first six months of life, and they have seen some neurodevelopmental effects. What’s interesting is that the effects seem to be related to the pandemic, rather than the virus — the stress around the pandemic and the effects of stress during pregnancy seem to be more potent than the virus itself.”

On Depression During Pregnancy

“Depression is common during pregnancy. We think it affects anywhere from 5-10% of pregnant women. Currently the most common treatments are serotonin-base antidepressants, like Prozac and Zoloft. What got us concerned is that the placenta does not seem to be a barrier for these medications, so the serotonin-antidepressants cross the placenta and are certainly affecting the fetal brain. The other area that’s got us concerned is that a preclinical study through animal studies showed that serotonin in the adult brain works as a neurotransmitter, so it helps brain regions communicate with each other — but in the fetal brain, it looks like it has a very different function. It seems to guide how the fetal brain is actually growing.”

“When patients ask me about my recommendation for treating depression during pregnancy, it is a difficult issue. But I think the foremost principle has to be that the depression in and of itself is harmful, and treating it needs to be our priority, as it is a known risk, whereas the effects of the medications to the fetus are still somewhat hypothetical. However, we have good, effective psychotherapies and treatments that are not serotonin antidepressants, so usually, in my practice, that’s the first line of treatment that I recommend.”

On the Effects of Cumulative Stress

“Chronic exposures to sources of stress like structural racism can result in physiological wear and tear and cause accelerated aging for people who are experiencing this exposure. Higher allostatic load is characterized by dysregulation of metabolic and cardiovascular systems and chronic inflammation, which are linked with increased risk of cancer, adverse maternal outcomes, increased risk of premature deaths, and poor infant health. We’ve found that not only do Blacks in the U.S. have higher allostatic load, but it also begins earlier in life, so that cumulative stress starts earlier for Black Americans than for other racial groups and remains high over the life course of a person over other racial groups.”

“There is an adverse effect of allostatic load on the offspring. There is strong evidence and data going back several decades that shows this allostatic load and accelerated aging results in adverse maternal mortality outcomes. In the U.S. now, Black women have about 2.5 times the rate of maternal mortality compared to white women in the U.S. That is clearly a crisis we need to address.”

“We’ve developed two devices for cervical cancer imaging. The original device, the pocket colposcope, addresses the issue of bringing a standard colposcope, which is used in the clinic to visualize abnormalities of the cervix for biopsy. This was inspired by a visit to Tanzania, where physicians needed something small that is as good as colposcope to use in the field. The pocket colposcope enables us to get high-quality images without the need for a clinical colposcope, which is an order of magnitude more expensive. The fact you insert the pocket colposcope helped inspired the development of the Callascope. We also want to empower women to do a lot of the screening that would otherwise be done in a clinic for a number of reasons: It reduces the number of visits a woman needs to make, and it is a way for women to be empowered and understand more about their body. The Callascope is an imaging device that works like a speculum but is more like a tampon and is shaped like a calla lily, which enables us to tip the cervix into place to get a clear line of sight to image. Women can use it themselves, and they and their providers can see the images of the cervix.”

Tomi Akinyemiju, PhD, is associate professor and vice chair for diversity and inclusion in the Department of Population Health Sciences, associate research professor at the Duke Global Health Institute, and associate director for outreach and engagement at the Duke Cancer Institute.

Nimmi Ramanujam, PhD, is the Robert W. Carr, Jr., Distinguished Professor of Biomedical Engineering, professor of cancer pharmacology and global health, and co-program leader of the Radiation Oncology and Imaging Program at the Duke Cancer Institute.

Carolyn Coyne, PhD, is a professor in the Department of Molecular Genetics and Microbiology.

Jonathan Posner, MD, is a child and adolescent psychiatrist and an instructor and vice chair for research in the Department of Psychiatry and Behavioral Sciences.

Alissa Kocer is communications strategist for the Duke Precision Genomics Collaboratory, Duke Center for Genomic and Computational Biology, and the Duke Center for Advanced Genomic Technologies

Enhancing the Research Enterprise at Duke: Building on Duke Science and Technology