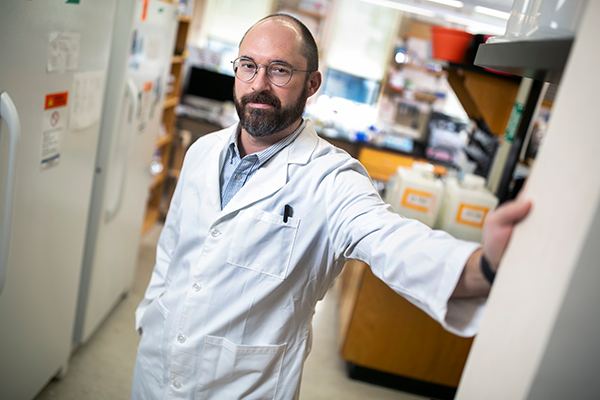 Nick Heaton, PhD, is interested in the little things. Microscopic, in fact. The assistant professor of molecular genetics and microbiology joined Duke in 2015 to investigate RNA respiratory viruses, primarily influenza.

SARS-CoV-2, the virus that causes COVID-19, is also an RNA virus. RNA viruses have higher mutation rates than DNA viruses and can be harder to treat. When the pandemic started, Heaton pivoted to focus on SARS-CoV-2. “When other people were shutting down their labs, we were ramping up,” Heaton said.

Since SARS-CoV-2 is a high biocontainment virus, he had to find space in a Biosafety Level 3 lab, which is designed to accommodate dangerous airborne pathogens, and don personal protective equipment jumpsuits to get his COVID-19 research up and running. As the pandemic has stretched on, he’s been able to gain a broader picture of how things work in different virus systems using SARS-CoV-2 as a model to compare and contrast to influenza.

Most of his work with coronavirus has been part of a host-directed therapeutics program funded by the Defense Advanced Research Projects Agency (DARPA). Host-directed therapeutics differ from standard direct-acting antivirals, which attack viral proteins to stop their function. “If viral proteins can’t function, the virus is dead,” Heaton said. “But viruses are experts at mutating, and those mutations can help them evade direct-acting antiviral drugs.”

Host-directed therapeutics, though, don’t target viral proteins; they target proteins in the host’s cells — either by blocking something the virus needs to replicate or turning on something in the cell that can fight the virus. “The virus will have a hard time mutating to escape because you’re not targeting it directly,” said Heaton. “You’re targeting what the virus is grabbing to take advantage of.”

Even more enticing, previous research has shown that many viruses use the same materials in the cells, so there is potential to create a broad-spectrum antiviral drug, which holds promise for combating future pandemics.

But with over 20,000 potential proteins a virus could use, needle, meet haystack. Heaton and colleagues have been using CRISPR, a powerful gene editing tool, to conduct high-throughput genetic screens to narrow the field of search. “We can use CRISPR-based technology to dial up or down all of the genes in the genome one at a time,” Heaton said.

Genes are like switches with a dimmer knob. You can turn them on or off, but you can also dial them up or down a little or a lot, controlling how much protein they express. “We can add a virus on the cells, and using these high-throughput screens, we can look for which cells are now resistant to infection or resistant to virus killing,” Heaton said.

They’ve found several proteins of interest, but looking at cells individually is like studying the ocean by looking at a glass of sea water. It doesn’t tell the whole story. An animal model provides a better understanding of what happens to these cells inside complex living systems.

So Heaton’s lab is making genetically modified mice to start exploring the preliminary findings from the high-throughput CRISPR screens and prioritize potential candidates for host-directed therapeutics. They’re looking for proteins that the virus needs but the host, at least temporarily, doesn’t. From there, they can develop a therapeutic that can temporarily stop a gene from producing that protein as one potential avenue for a host-directed therapeutic.

“If we can show that animals can grow, develop, and live happy, long lives without a particular protein in its body,” Heaton said, “that’s pretty strong evidence that a person can likely tolerate missing that protein for a week or two to combat a virus.”

Heaton’s long-term goals include gaining a better understanding how viruses are using and being affected by proteins. From there, he hopes to collaborate with others to get these host-directed therapeutics into clinical trials.

“Host-directed antiviral therapeutics are an emerging area with tremendous promise,” Heaton said. “Hopefully these types of early studies will help us gain some traction and make these kinds of approaches into reality.”