Unraveling the Mysteries of the Immune System 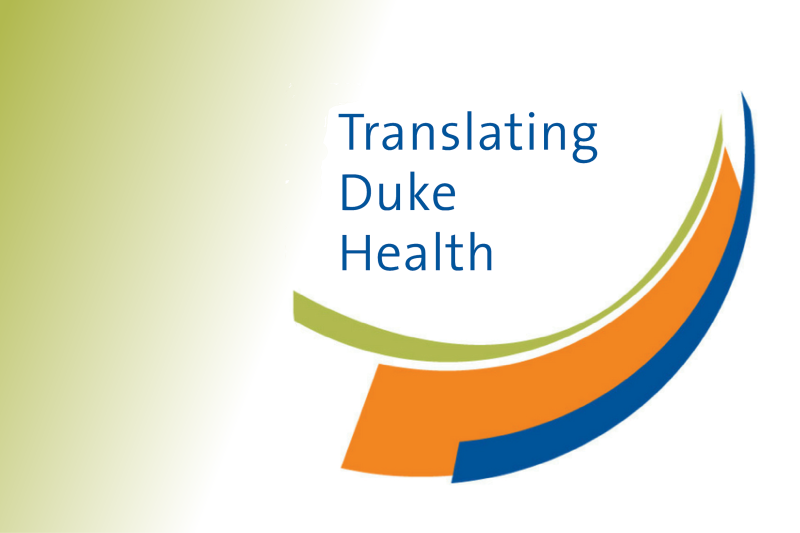 Pause for a moment, and take a deep breath.

Now, as you read this, your immune system is hard at work: analyzing the thousands of microbes you just inhaled and which now fill your respiratory tract and lungs. Sensor cells, one of your body’s first lines of defense, are searching for potentially dangerous pathogens, and split-second decisions are made whether to trigger a defense response toward any unwelcome visitors.

When functioning properly, the immune system maintains this delicate balance on a continuous basis, scanning for friend or foe and responding accordingly. Understanding how the system functions harmoniously with our environment — and how we can harness its power to improve human health — is one of the five pillars of the Translating Duke Health Initiative.

Under the leadership of Allan D. Kirk, MD, PhD, chair of the Department of Surgery, the immunology steering committee has successfully worked for five years to increase funding for discovery-based and translational immunology research at Duke, recruiting top scientists in the field to the institution to continue this important work.

“Every disease is influenced by immunity,” Kirk said. “The immune system has evolved over millions of years to maintain homeostasis despite continuous threat, and those threats can come from the outside, microorganisms, or trauma, but also from the inside when cells that are normal transform into cancer cells, or when the immune system inappropriately recognizes our own cells as being foreign, such as in autoimmune-disease.”

Tapping into this powerful and complex system has the potential to improve human health in myriad ways.

In late 2019, as the world started to hear whispers of an emerging virus in China, Priyamvada Acharya, PhD, associate professor in the Departments of Surgery and Biochemistry, was in the process of applying for a grant on human parainfluenza virus type 3 (HPIV-3).

Acharya came to Duke in 2019 as a result of Translating Duke Health’s recruitment efforts. As an immunologist who had studied the human immunodeficiency virus (HIV) for most of her professional career, Acharya was interested in using the tools she had already learned and apply them to a new virus.

The timing of this decision, it turns out, was serendipitous.

“I started looking at the structure of the HPIV-3 fusion (F) protein, and was intrigued by its large central cavity,” Acharya said. “It was a structure that was unique, in that it was ‘full of empty.’ We started looking at other viral proteins with similar large internal cavities, and came across the spike protein of coronaviruses. That’s when we turned our attention to SARS-CoV-2 that was emerging in China at the time.”

Because Acharya was already funded by an R01 grant from the National Institutes of Health (NIH), she was able to receive a supplement to expand her work into studying coronaviruses and SARS-CoV-2. Previous efforts by the Translating Duke Health initiative to fund immunology research at Duke made this rapid pivot in research scope possible.

“In a sense, we were taking our first steps, because we had no idea of the biology of this new virus,” Acharya said, “so we thought we should do what we know. We knew proteins, so if we forgot all the biology, that perspective would not be that hard.”

Over the next year, Acharya and her collaborating researchers would study the protein structures on the surface of SARS-CoV-2, eventually discovering that the virus’ spike proteins were mutating to create variants that made the virus more transmissible. In August 2021, Acharya and her team published this important research in Science.

“I want to thank the Translating Duke Health initiative,” Acharya said. “The startup funding I received was key to getting other funding and to really dig into new science. It was key to have that support from the Duke Human Vaccine Institute.”

Acharya continues to study the new SARS-CoV-2 variants as they emerge, including BA.5, to understand how they are able to evade the body’s immune system even if antibodies are present from the COVID-19 vaccine.

Now, in 2022 as infections continue, the importance of this research is exceedingly clear.

Weaponizing the Immune System: Finding Cells with the Killer Instinct

While the immune system fights its continuous battle, researchers like Acharya study the invaders: the bacteria, viruses, and pathogens that cause disease.

Other scientists, such as R. Keith Reeves, PhD, professor in the Departments of Surgery and Pathology, focus their attention on the other side of the battlefield: investigating the biology of human cells and how they respond to these outside threats.

Reeves was recruited to Duke from Harvard University in 2021, joining the newly created Center for Human Systems Immunology, which was founded to promote Translating Duke Health efforts. His research, supported by multiple R01 and P01 grants from the NIH, seeks to answer questions about the mechanisms and behavior of natural killer (NK) cells.

Unlike T and B immune cells, which adapt over time as they encounter pathogens, NK cells are generally considered part of the body’s innate immune response, attacking anything in the body that appears to be “non-self.” Reeves has made notable strides in helping the scientific community understand the important role that NK cells play in the immune system.

This discovery has opened the door for further investigation on how NK cells can be used in cell-based therapies, a major component of Reeves’ current research.

“We are currently conducting molecular, cell-based, and protein assays to determine the mechanisms of how NK cells could best recognize an HIV-infected cell, or how they could recognize an influenza-infected cell,” Reeves said. “Then going one step beyond that, we want to know what mechanisms they use to eliminate them, once the NK cells recognize a sick cell versus a healthy one.”

With gene-editing technologies such as CRISPR (Clustered Regularly Interspaced Short Palindromic Repeats), Reeves says that NK cells could be modified and programmed to initiate a specific response. This process has the potential to create powerful cell-based immunotherapies.

Conversely, understanding the function of NK cells and how to suppress their immune response has other important applications, including in transplant research.

“One of the reasons that our team came to Duke is that we are very interested in seeing where we could take our work and expertise and apply it to transplant studies,” Reeves said. “As good as NK cells can be for responding to infectious disease or cancer, they may actually complicate matters during organ transplant.”

Reeves added that it’s important for research programs to study NK cells “in reverse,” learning how to dampen the immune response in order to achieve better outcomes.

Fortunately, Duke has a long history of investigative research in transplant immunology.

As a surgeon-scientist, fourth-year general surgery resident Brian Shaw, MD, has a unique perspective in the field of immunology. In the laboratory, he researches how immune cells specifically respond to organ transplant, how they change over time, and what treatments can be used to manipulate their response. In the operating room and clinic, he sees the direct impact of immunosuppressive therapies on patients post-transplant.

“In spite of great advances in solid organ transplantation, we still have really poor outcomes for people with end-stage organ disease,” Shaw said. “In fact, successful kidney transplantation still only offers survival that is the same or worse as breast cancer with metastatic disease. Most of the morbidity and mortality associated with transplantation is due to imperfect immunosuppression.”

Paraphrasing from Kirk, Shaw said that every immune response is a decision that has three components: specificity, context, and magnitude. Research has been able to successfully track the context in which the immune system activates and the magnitude of its response — but the specificity of how the system works remains an unanswered question.

For patients who require immunosuppressive therapies, this gap in knowledge about the specific cells that respond to and injure a transplanted organ requires that the patient’s entire immune system be suppressed in order to prevent organ rejection.

“As we know, immunosuppression is not benign,” Shaw said. “It has all sorts of negative side effects. Patients on chronic immunosuppression have two times the mortality rate from cancer as the general population.”

As a potential solution, Shaw’s research tracks specific immune cells affected by transplant and how they can be manipulated to blunt their response to the new organ. Rather than lowering the overall level of activation of the immune system through immunosuppressive therapies, this research could reveal what therapies will specifically inhibit the cells which cause transplanted organs to fail.

“We’re fortunate to be at Duke,” said Shaw, whose work is currently funded by an R38 grant to support clinician-scientists. “This work requires very specialized instrumentation, and also specialized analysis. All the tools we're using utilize next-generation sequencing — including single cell sequencing — to analyze T cells and their specific receptors over time.”

At Duke, an institution that recently completed its 10,000th organ transplant, Shaw says he is grateful to be in an environment that is able to help so many patients through transplant.

“I think it shows you the impact that we’re having on people,” Shaw said. “Organ transplant is one of the few things that we do where the patients get better within a matter of days to weeks. Someone who needs a kidney transplant can sometimes be off dialysis the next day. If someone needs a liver transplant, they could be sick in an ICU on a ventilator, and within a week or two they’re walking out of the hospital to be with their families. It says something about our society, that we’ve been generous enough to donate these gifts to others.”

Controlling the Immune System: Not Yet, But Getting Closer 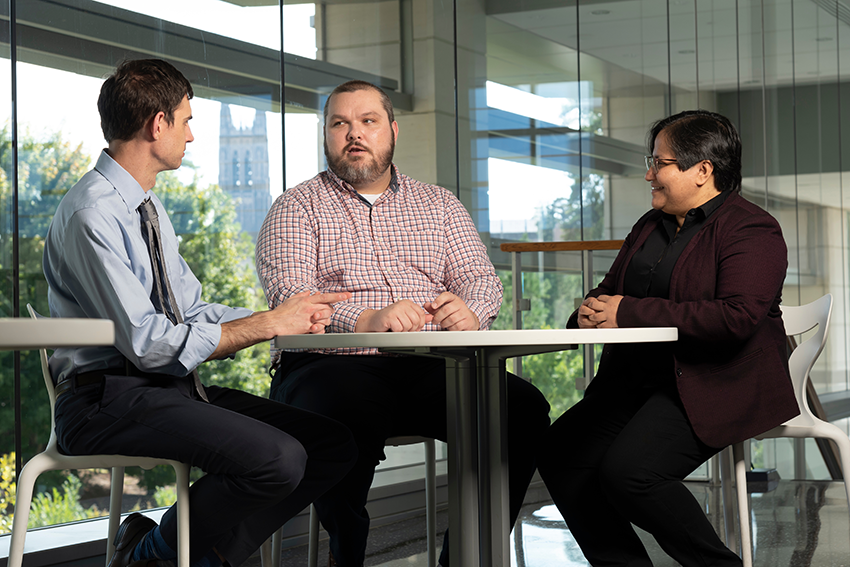 Acharya, Reeves, and Shaw are just three researchers among many at Duke who have been supported by the Translating Duke Health Initiative. Across the university, overlapping investigation contributes to our ability to unravel the mysteries of the immune system.

“The understanding of how immunity can be harnessed as a tool to protect us better is the real focus of this initiative,” Kirk said. “The solution we’re seeking is to completely characterize and understand the signals used in that network so they can be harnessed, recognized, and mobilized as tools themselves.”

With each scientific discovery, immunology researchers at Duke get closer to doing just that.

Scott Behm is Director of Communications for Duke Surgery

Duke Study Launches into Space Aboard Artemis I