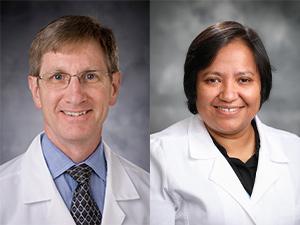 The Translating Duke Health Initiative (TDH) —a multi-year, multidisciplinary program designed to bring Duke teams together to address society’s most challenging health issues—continues to push forward with innovative projects and new partnerships since its launch in Fall 2017.

So far, 24 grants have been awarded totaling more than 2.8 million in seed funding. Eight School of Medicine departments have participated to recruit 17 strategic hires, called TDH Scholars, with additional recruitments ongoing. Twelve million dollars has been earmarked to support research infrastructure to accelerate discovery, including such things as a biobanking resource, and 24 educational symposia were hosted to bring together basic scientists, clinicians, and population health thought leaders.

“TDH has been a success by every measure,” said Allan Kirk, MD, chair of the Department of Surgery, and convener of the immunology pillar of the initiative. “It has facilitated a remarkable number of luminary recruits, stimulated new science, and brought multidisciplinary communities closer together. I think this is the way institutional science should be done.”

The immunology pillar group that Kirk leads has invested almost $10 million in research at Duke over the last two years, investing in seven pilot projects, primarily supporting young investigators. The funding has also been used to recruited ten faculty members who have already brought in substantial NIH dollars.

One of these recruits is Priyamvada Acharya, PhD, associate professor of surgery and director of the Division of Structural Biology for the Duke Human Vaccine Institute. Acharya, who was recruited from NIH and the New York Structural Biology Center, uses cryogenic electron microscopy (cryo-EM) to study how HIV is able to enter human cells and how the human immune system responds to HIV infection.

Using this technology, she can obtain high-resolution images revealing details of the HIV Envelope (Env) protein that forms nanoscopic spikes on the surface of the virus. These spikes protrude from the virus to attach to the human cell, allowing the two cells to fuse and the viral genetic material to enter the human cell.

Acharya wants to know the precise, atomic-level details of how the immune system recognizes and changes in response to the evolving virus. Her goal is to use this understanding to develop an HIV-1 vaccine.

“Cryo-EM helps you rapidly figure out the fine details of intermolecular interactions, thereby giving you the tools to manipulate it,” she said.