The Structure of Cool: How a Cell Channel Transforms to Make us Feel Cold 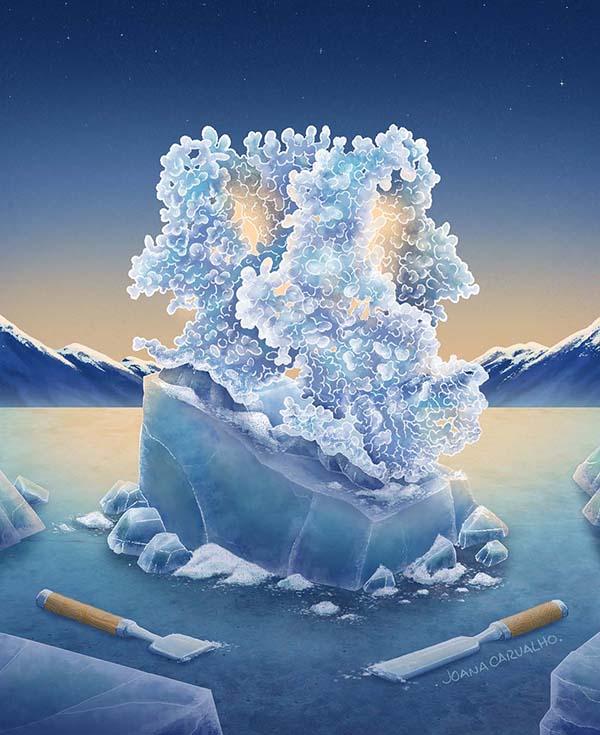 We reach for cough drops when we’re sick, pain cream for aches, breath mints to freshen up, eye drops for dry eyes, and cold packs to ease inflammation after injury. All of these products seem vastly different from one another, yet they have one big thing in common: the cell-surface ion channel they activate.

Humans and animals sense cold through temperature drops and menthol. The ion channel TRPM8 detects the cold and sends signals to sensory neurons to tell us we are feeling something cooler.

In a paper appearing October 14 in Science, Duke researchers shed light on how TRPM8 operates in mammals to sense cold, both physically, through temperature changes, and chemically, from menthol, which they say could help drug developers create better therapeutic treatments for pain and inflammation.

Using a technique called cryo-electron microscopy, (Cryo-EM), Seok-Yong Lee, PhD, professor of biochemistry, and colleagues achieved a major milestone by capturing the structures of the mammalian TRPM8 ion channel as it moved from closed to activated states. The result is like assembling individual frames into a movie, giving a 3D view of how TRPM8 changes shape over time as it activates. Up until now, researchers had only been able to determine the closed structure of TRPM8 in a bird model.

Ion channels are pore-forming membrane proteins that allow ions to pass through. Like a filter, only certain ions can pass through the channel.

“Usually when you study the structure and function of an ion channel, it possesses a pore that opens in response to a specific stimulant to allow passage of certain ions,” Lee said. “Normally, the shape of the pore doesn’t change much when an ion channel opens.”

But with TRPM8, Lee and his team discovered that the shape of the ion channel pore changes completely. It starts off looking wide and unpore-like, but as cooling stimulus is introduced, the pore gradually changes shape to allow ions to pass through. This flow of ions ultimately activates the neurons responsible for sensing cold.

“We think,” Lee said, “this unique design of TRPM8 enables it to sense cooling stimuli.”

The change in protein structures in response to cold or menthol-like chemicals is transient, making it challenging to study.

Many injuries and diseases – like  sprains, breaks, arthritis, asthma – can cause inflammation in our bodies. “If you activate this channel,” Lee said, “you generate a cool sensation, which helps relieve inflammation.”

The TRPM8 protein is therefore the target of some painkillers including topical remedies that contain menthol. Knowing how the TRPM8 ion channel is activated could help improve these drugs.

The flip side of this would be developing drugs that inhibit the TRPM8 channel. Some people, like those with Raynauds’s syndrome and fibromyalgia, experience cold hypersensitivities -- even the slightest bit of cold is painful for them. For them, the TRPM8 pathway activates more easily, and inhibiting it could bring them relief, Lee said.

“This system can be targeted by both activating and inactivating therapeutics, but how mammals sense cold is still a fundamental question in neuroscience,” Lee said.

In Search Of: Early Diagnosis