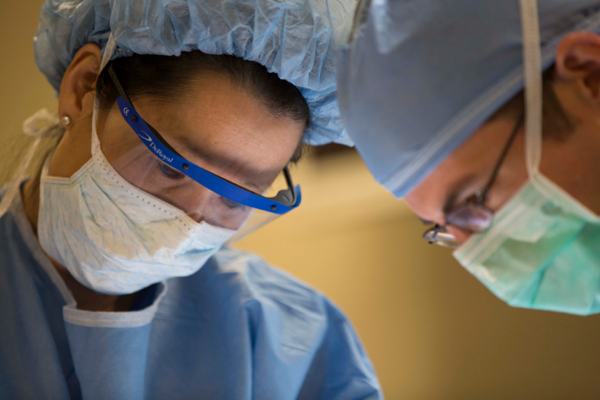 A Duke University School of Medicine study shows the potential of new imaging technology to change the landscape of breast cancer surgery.

Incorporating the imaging system during operations reduced the need for repeat surgery by 19% among women undergoing lumpectomy to remove breast cancer tumors, according to the study in JAMA Surgery.

“The preferred method is to have verification in real time that there are no residual cancer cells when tumors are removed,” said Hwang, a specialist in breast-conserving surgery and chief of breast cancer surgery at Duke Health. “This could reduce treatment delay, pain, anxiety and health care costs associated with second surgeries.”

During lumpectomy, the surgeon removes the cancer tumor and a sample of the normal tissue around it called the margin.

The tissue is sent to a pathologist to take a closer look for cancer cells. If cancer cells are found it could mean another trip to the operating room to remove more tissue.

Unfortunately, it generally takes about a week for surgeons and their patients to get answers.

An estimated 20% to 40% of women who have lumpectomy undergo repeat surgery because the marginal tissue shows sign of cancer.

In the recent study, researchers enrolled 234 women with early-stage breast cancer from 16 hospitals and cancer programs across the United States.

Women were selected for the trial developed to test the safety and performance of imaging technology developed through a collaboration with scientists at Duke, the Massachusetts Institute of Technology and Lumicell, Inc.

The imaging system relies on a fluorescent agent that was developed by investigators at Duke University and MIT, that is injected about three hours before surgery, and a handheld imaging device to scan the area where the tumor was removed to locate any lingering cancer cells.

Ideally margins are clear and show no signs of cancer cells.

During the study, the investigational imaging system prompted surgeons to remove additional tissue in 32 patients. In that group, six patients, a reported 19%, had residual tumors, meaning cancer tissue would have remained in the patients. Instead, surgeons were able to remove it immediately and avoid additional surgery.

Study authors say the imaging system is a promising tool for improving the health and cosmetic outcomes for women undergoing breast cancer surgery.

The sensitivity of the imaging system to detect cancer cells was much higher than standard pathology at 69%, compared to 38.2% sensitivity for pathology when assessing the main lumpectomy specimen.

Although the study found the procedure to be safe, one patient with a history of allergy to contrast agents had an anaphylactic reaction but recovered.

Hwang and colleagues in the INSITE study team conducted the clinical trial between 2018 and early 2020. Based on their findings additional research is underway to test the technology’s clinical performance.

The National Institutes of Health funded the study along with Lumicell, Inc., which provided support and participated in the study design and preparation for publication.