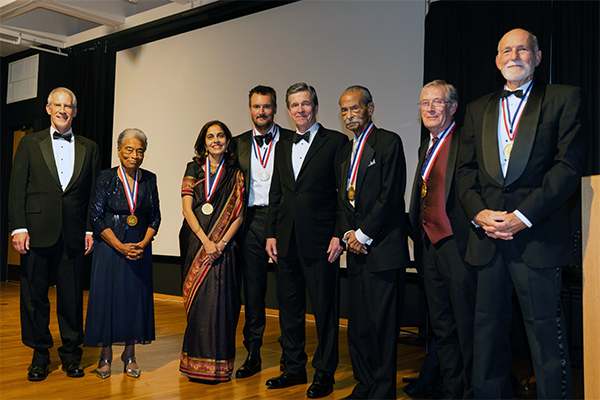 Priya Kishnani, MD, MBBS, Chen Family Distinguished Professor of Pediatrics and chief of the Division of Medical Genetics at the Duke University School of Medicine, received one of North Carolina’s highest civilian honors, the North Carolina Award, on November 15 for her contributions to science.

She has treated patients and conducted groundbreaking basic and clinical research for close to 30 years. Her innovative contributions translate laboratory science into treatment for people with lysosomal storage disorders, glycogen storage diseases, Down syndrome and other rare inherited diseases. As the lead principal investigator, Kishnani designed and conducted clinical trials that led to the first-ever FDA-approved treatment for Pompe disease. More recently, she was a member of a multi-national team that used an enzyme replacement therapy to treat a fetus for infantile-onset Pompe disease — a first in the world.

“Dr. Kishnani is a great example of Duke’s strong focus on the intersection of science and medicine, where health professionals and scientists are discoverers who break new ground that impact patients,” said Mary E. Klotman, MD, dean of Duke School of Medicine. “She also represents our commitment to giving back to the communities we serve. I am so pleased to see our state recognizing her many contributions as an outstanding citizen and physician-scientist.”

The North Carolina Award was created by the General Assembly in 1961 to recognize significant contributions to the state and nation in the fields of fine arts, literature, public service and science.

“These individuals have enriched North Carolina and our nation through their extraordinary accomplishments,” said Reid Wilson, secretary of the N.C. Department of Natural and Cultural Resources. “Each of them has enhanced the lives of North Carolinians through their lasting achievements in the arts, literature, sciences and public service.”

Since the award’s inception, more than 250 notable men and women have been honored by the state of North Carolina. Past recipients include Selma Burke, William Friday, James Taylor, Etta Baker, Charles Kuralt, Maya Angelou, Lee Smith and Branford Marsalis.

In 2021 two Duke faculty members, Tim Tyson and Blake Wilson, received the award. Tyson was honored for his literature on issues of culture, religion and race associated with the Civil Rights Movement, while Wilson was cited for his pioneering work in the development of the cochlear implant, which has restored hearing to millions of people around the world.