A Lifelong Commitment to Duke and Women’s Health Care 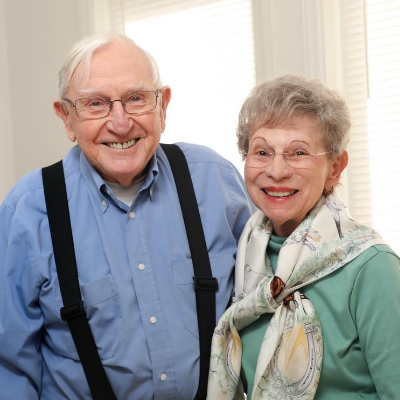 Growing up on a large farm near Toccoa, Georgia, Winnifred Allen “Al” Addison, AB’56, MD’60, HS’60-’65, HS’71-’72, P’83, GP’14, GP’18, was interested in anatomy from a very early age. He dissected a stillborn calf at his farm when he was just 13 years old. “I wanted to see what the inside of an animal looked like,” says Addison, the Walter L. Thomas Distinguished Professor Emeritus of Obstetrics and Gynecology.

He was inspired to become a physician by his uncle, Earle McCurry, MD, who practiced in a rural community in South Carolina. “When I visited him on holidays, he would always unlock his clinic and allow me to spend time with the skeleton,” says Addison. “He talked to me about being a doctor and showed me some of his instruments.”

Addison came to Duke in 1952 as an undergraduate student and majored in zoology. He then pursued a PhD in anatomy under the mentorship of Joseph E. Markee, PhD, who was then chairman of the Department of Anatomy and assistant dean for admissions of Duke University School of Medicine. After one year in the program, Addison realized that his real passion was in medicine and not in research, and he was admitted as a second-year MD student at the Duke University School of Medicine.

Addison met his wife, Sally Addison, BSN’60, P’83, GP’14, GP’18, on the Osler Ward at Duke University Hospital. He was a junior medical student, and Sally was a junior nursing student at Duke University School of Nursing. “We were both taking care of the same patient on the internal medicine ward,” says Sally Addison. The couple married in 1959, while they were both senior students at Duke, and they recently celebrated their 61st wedding anniversary. Their daughter, Rebecca Addison Jordan, BSN’83, P’14, P’18, as well as their granddaughter, Sarah Manning Jordan, BSN’14, MSN’18, both followed Sally’s footsteps into nursing and graduated from Duke University School of Nursing.

The Addisons are loyal supporters of the Davison Club and the School of Nursing. “I was in the last class to finish before Dean Davison retired,” says Addison. “He was a magnificent teacher and leader of people.”

After graduating from the School of Medicine, Addison went on to do an internship in internal medicine at the Medical College of Georgia. He became interested in reproductive endocrinology. “It goes back to my farm days,” he says. “I closely observed the behavior of animals and learned a lot about animal reproduction. This interest was enhanced by exposure to Edwin C. Hamblen, MD, during medical school.”

After completing his internship, Addison came back to Duke for a fellowship in reproductive endocrinology with Hamblen, founder and emeritus director of the Division of Endocrinology, who was known as a groundbreaking researcher in the field.

Addison planned to go back to Georgia to do his residency in gynecology, but then the Cuban Missile Crisis began. “A lot of house staff got drafted, and I was asked to take night calls while still a fellow. So I never officially applied for the residency. They just kept me in it,” says Addison. F. Bayard Carter, MD, was chairman of the Department of Obstetrics and Gynecology at that time.

Addison was privileged to work with Roy T. Parker, MD, who became chairman of the department after Carter, and who helped Addison defer his military draft until he completed his residency. “My happiest hours during that stressful time were those spent in the operating room with Parker, especially when it involved extended surgery,” says Addison.

In 1965, Addison was called to active duty in the military and served for two years as an obstetrics and gynecology physician at Martin Army Hospital in Fort Benning, Georgia. After his army service, Addison spent a very worthwhile year as a faculty member at Emory University Medical Center. There he met John D. Thompson, MD, who became a lifelong friend and mentor. “He was truly a magnificent pelvic surgeon,” says Addison.

He then went into private practice in his hometown in Georgia, where he was the only obstetrician and gynecologist in the clinic.

“I believe that anyone who chooses to teach medical students, residents, and fellows, as I did, should spend some time in private practice in rural areas.”

In the early seventies, Addison came back to Duke and joined the School of Medicine faculty after a fellowship in gynecologic oncology. He then became director of the Division of Reconstructive Pelvic Surgery. He served as director of the residency program for many years and felt privileged to teach and learn from the residents and fellows.

In 2004, Addison retired from Duke after more than 30 years of service. He and Sally enjoy living on their farm in North Carolina, where they still have two quarter horses, having raised many, and two dogs. Addison hunts deer for venison and enjoys working outside, especially with his tractors, but he misses his work every day. “I mostly miss the residents and fellows,” he says. “I considered them as colleagues and not as students. They come back to visit me here.”

In honor of Addison’s distinguished career as a physician, teacher, and mentor, Duke alumni and friends established the W. Allen Addison, MD Professorship Endowment Fund in the Department of Obstetrics and Gynecology in 2015.