Four Things to Know About Cryo-EM at Duke 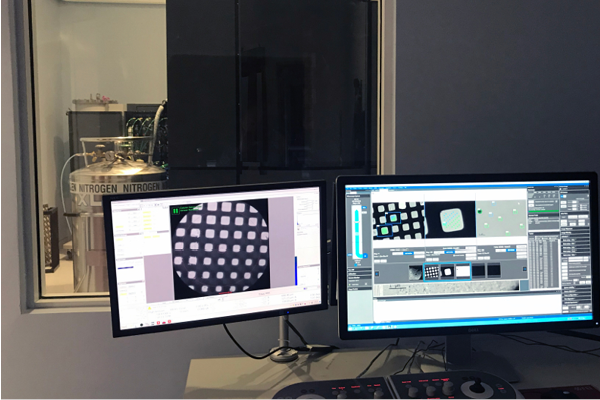 What's in a shape? As it turns out, a lot. Understanding the structures of proteins and other molecules in extremely fine detail can be key to finding out how they work. And that knowledge can open the door to development of new vaccines and therapeutics.

To accomplish that, Duke researchers have access to an advanced tool called Cryogenic electron microscopy (Cryo-EM), which rapidly creates high-resolution images of the smallest pieces of proteins (at the atomic level). Three researchers won the 2017 Nobel Prize in Chemistry for pioneering the technique. In 2018 Duke acquired and installed its own cryo-EM machine, thanks to funding from Chancellor for Health Affairs A. Eugene Washington, MD, said Jennifer Foreman, assistant dean for basic science in the School of Medicine.

The instrument cost $8 to $10 million to purchase and install, including renovations to accommodate it, said Mark Walters, PhD, director of the Pratt School of Engineering's Shared Materials Instrumentation Facility, which houses and runs the microscope.

Read on to learn more about Cryo-EM and how it has become a workhorse in the Duke Human Vaccine Institute's efforts to create a vaccine for HIV.

1. Duke is home to one of just four cryo-EM instruments in the Carolinas.

In August 2022, NIEHS deployed its second instrument, a Titan Krios like the one at Duke, said Mario J. Borgnia, PhD, director of the Cryo-EM Core at NIEHS. All three institutions are part of the Molecular Microscopy Consortium, based at NIEHS, which promotes the use of cryo-EM and other microscopy tools to understand molecular structures at the atomic level and provides training to researchers from these institutions who want to use them in their work.

2. The "cryo" part of the microscope’s name means that it freezes the proteins or other specimens to keep their structures intact while a beam of electrons hits them.

Electron microscopy takes place inside a vacuum, Walters said, so if you tried to image the specimens at room temperature, "They would basically collapse in on themselves."

The machine collects data using either single particle analysis, which takes thousands of images of purified proteins in random orientations, or tomography, in which images of larger biological structures are taken at various tilt angles, Walters said. Researchers use computer software to stack the images to create high-resolution, three-dimensional models.

Staff member Nilakshee Bhattacharya, PhD, oversees the operation of the machine and trains researchers in its use. The high demand means that the cost for researchers — $55 per hour — is relatively low, Walters said. A handful of research groups in the School of Medicine are heavy users, most of them in the Department of Biochemistry and the Duke Human Vaccine Institute. Nobel Prize winner Robert Lefkowitz, MD, James B. Duke Distinguished Professor of Medicine, uses the microscope frequently and was one of the advocates for bringing cryo-EM to Duke.

4. Cryo-EM is crucial in the Duke Human Vaccine Institute's quest to develop a vaccine for HIV.

The microscope has taken over as the main method that Priyamvada Acharya, PhD, director of Duke's new federally funded Center for HIV Structural Biology, uses to understand structures related to HIV.

"Without frequent and ready access to a high-end microscope capable of collecting data that allow us to resolve atomic level details, much of the work that goes into structure-based vaccine design would not be possible," Acharya said.

She explained that proteins are long chains of amino acids that fold into a distinct shape that defines their function. With HIV, for example, the unique shape of the HIV-1 Envelope (Env) protein creates a binding site for a receptor called CD4. "After binding to CD4, the shape of the Env changes, allowing it to bind additional receptors," she said.

Further down the pathway, more changes in the envelope's shape allow HIV to enter human cells. Visual models of these interactions are key to learning how to design a vaccine, Acharya said. "Structural biology allows us to visualize the shape and dynamics of biomolecules, thus providing a window into their function and the ability to alter it."