“Everything Reminds Me of a Story:” Nobel Laureate Bob Lefkowitz, MD, publishes memoir 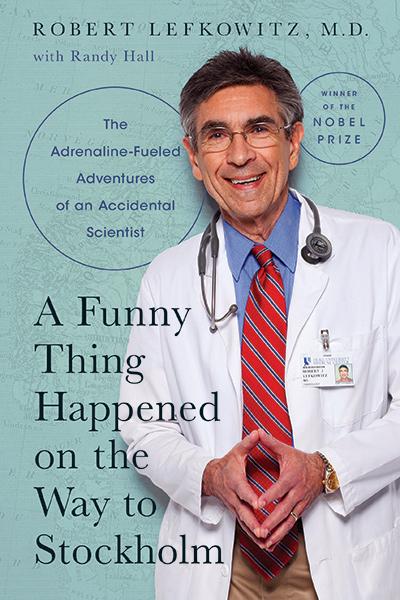 You can’t grow up in the Bronx, enter medical school at age 19, serve as a Yellow Beret for the National Institutes of Health (NIH), discover one of the most therapeutically accessible proteins in the human body, and win the Nobel Prize for Chemistry without acquiring some stories. And Robert Lefkowitz, MD, James B. Duke Distinguished Professor of Medicine in Duke University’s School of Medicine, has some good ones.

So good, in fact, that his former trainee Randy Hall, PhD, now a professor of pharmacology and chemical biology at Emory University, insisted that they work together to write them down. The result is Lefkowitz’ first memoir, titled “A Funny Thing Happened on the Way to Stockholm” which will be published in February 2021.

The memoir is filled with hilarious and warm-hearted stories from Lefkowitz’ childhood and young adulthood about the experiences that inspired him to become a doctor, and later, a scientific researcher. It chronicles his career at Duke University, where he has served as a faculty member since 1973.

Lefkowitz shared the prize with Brian Kolbilka, MD, for their discovery of and work on G-protein-coupled receptors, a large family of cell surface receptors that detect molecules outside the cell and activate cellular responses. Today, more than 30 percent of all prescription drugs are designed to target these receptors—everything from antihistamines to ulcer drugs to beta blockers that help relieve hypertension, angina and coronary disease. Kobilka was a post-doctoral fellow in Lefkowitz's lab in the 1980s.

A lover of good storytelling, Lefkowitz, 77, had wanted to compile his stories into a book for some time.

“Everything reminds me of a story, and I’m always telling stories to my trainees,” he said. “If they stay with me long enough, they get to hear the same story over and over again, just like you do with your aging grandparents. I had been urged by many of my trainees for decades to write up all the stories. But I was always too busy and I’m quite certain it never would have happened except for Randy Hall.”

Hall, a diehard Duke basketball fan who worked as a postdoctoral fellow in Lefkowitz’ lab in the late 1990s, was visiting Lefkowitz when he was in Durham for a game in January 2019 and finally convinced him to start the book writing journey. During the rest of 2019, the two talked by phone weekly, with Lefkowitz reminiscing about his life’s journey and Hall writing it all down.

“Bob told me all of his stories in roughly chronological order, and I recorded them,” said Hall. “I then wrote drafts of the stories and sent them to Bob for editing. During the writing process, it was fun for me to listen to our recorded conversations and hear myself frequently busting out laughing as Bob was regaling me with his tales.”

In the 1990s, Lefkowitz and Tony Fauci served together for a decade on the council of the Association of American Physicians (AAP).

For Lefkowitz, it was important to him that the book be funny.

“Having a humorous outlook on life is not something everybody has,” said Lefkowitz. “Nothing that happens to one is inherently either funny or unfunny. It’s a matter of how you perceive it.”

In choosing which stories to tell about his life, Lefkowitz chose the ones that he thought would be most insightful and entertaining for readers. Stories from earlier in his life required some fact-checking to be sure he remembered them correctly, and so he called old friends when possible to get their takes on the events.

“Some of the memories go back to childhood, and one of the things you learn about [when writing a memoir] is the fallibility of memory,” he said. “Something I’ve learned in my career is that if you had three people in a meeting and then afterwards you interview them all to find out what was said, you get three different versions. I’m talking an hour later, not fifty years after the fact. People hear very different things or they might have zoned out and not heard anything at all. So we were just trying to be as accurate as we could with as many things as possible.”

Randy Hall, (left) co-author of Lekfowitz’ memoir and his wife Liberty enjoy a pre-game drink with Lefkowitz at the Washington Duke Inn before heading to a Duke basketball game in 2011.

More than 70 stories were left on the cutting room floor, he said, leaving him to ponder whether there should be a sequel. He hopes to attract a wide audience for this first book, from scientific peers he has met around the world throughout his career to students and trainees interested in a career in biomedical science. Mentoring is a major theme throughout the memoir; more than 200 students and trainees have worked in his lab at Duke.

“Especially for students, I’d like to inspire them with the idea that one can lead a fulfilling, enjoyable life that matters,” said Lefkowitz. “And that hopefully a book like this can inspire them to aspire to such a life and also illustrate that while doing things that are fulfilling and that really matter, you can have a hell of a great time.”

The memoir will be available from Pegasus Books on February 2, 2021, and is currently available for pre-order at Amazon and Barnes and Noble.

Anyone from the Duke community who wants a signed copy of their book can place a pre-order and then email proof-of-purchase plus shipping address information to Icee Li (yl703@duke.edu).  You will receive a bookplate signed by Dr. Lefkowitz, which can be inserted into your book to create a signed copy.  This special promotion for members of the Duke community is available only for pre-orders.

Lefkowitz sketches a plan of action with medical student Erin Bressler. “No matter what other adventures are on offer, my favorite place to be is still in the lab, schmoozing with my trainees, analyzing data, and dreaming up future experiments,” Lefkowitz says.

All photos courtesy of Dr. Lefkowitz and Dr. Hall.