By Giselle Wang and Angela Spivey 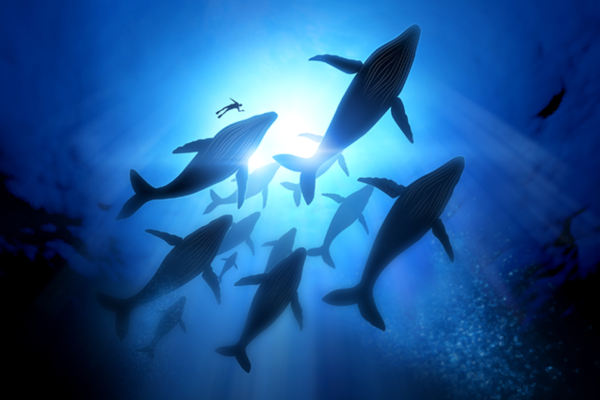 Imagine you take a long deep breath after breakfast, then hold it. You go about your day, walk to classes or work, all without taking another breath. Finally, just before lunch, having exhausted all the oxygen in your body, you exhale and then inhale more precious air.

For the Cuvier’s beaked whale, an elusive deep-diving marine mammal, this is just routine. In 2020, a group of researchers from Duke University recorded the longest dive ever for this species — 3 hours and 42 minutes — and published their findings in the Journal of Experimental Biology.

Now Duke cancer biologist Jason Somarelli, PhD, will collaborate with this group of Duke marine scientists to explore the cellular adaptations these whales possess that gives them such an amazing ability to tolerate low-oxygen (hypoxic) environments as they dive and forage for food. "These whales are world-record divers; they dive down the equivalent of seven Empire State Buildings," said Somarelli, assistant professor in medicine.

With funding received in December 2022 from the United States Office of Naval Research, he will use those cell culture models to study the cellular and molecular mechanisms involved when whales hold their breath, and how stress from ship noise may affect this ability at a cellular level.

Somarelli hopes the study will reveal ways to protect whales. It may also provide clues to combating human health challenges that involve low-oxygen states, he said.

Previously published studies have shown that man-made noise levels in the ocean have doubled every decade since the 1950s, mainly from ship traffic, seismic surveys, and industrial activities, he said. In the aftermath of the 9/11 attacks, ship traffic decreased dramatically in the Atlantic Ocean, making for a much quieter environment underwater. This presented an ideal natural experiment for marine biologists, who observed that anthropogenic noise can induce stress in whales.

Somarelli will work closely with Andy Read, PhD, director of the Duke Marine Lab; Andreas Fahlman, PhD, and Tom Schultz, PhD, of Duke's Nicholas School of the Environment; and Nicola Quick, PhD, of the University of Plymouth. "We might be able to figure out how whales tolerate these low oxygen environments and how stress interplays with that," Somarelli said. "We think that our findings can inform which species we focus on for conservation."

As a surfer and husband to a Duke-educated marine biologist, Meagan Dunphy-Daly, PhD, Somarelli has always felt a connection to the ocean. He and Dunphy-Daly started the Scholars in Marine Medicine Program at Duke to offer undergraduate students research experience at the intersection of medicine and marine science.

The experienced team of undergraduates and researchers at Somarelli’s lab will expose the whale cell cultures to various conditions and observe how the cells change in response to their environment. "We can modulate the stress signals and levels of oxygen we expose these cells to in a rigorous way through controlled lab experiments," Somarelli said.

Low-oxygen states are relevant to many human health challenges, including heart attack, stroke, COVID-19, prolonged surgical procedures, and cancer, Somarelli said. In the long term, studying how whales tolerate low-oxygen environments could help lead to discovery of a druggable target that could be manipulated to help humans better tolerate hypoxia.

Giselle Wang is recent Duke University graduate who interned in the lab of Jason Somarelli, PhD.

Angela Spivey is a senior science writer in the School of Medicine's Office of Strategic Communications.