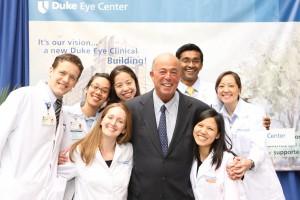 Dr. Epstein served as chair for the last 22 years, building and leading an outstanding community of ophthalmologists and vision scientists. Under his leadership, the department grew to include its current team of 73 faculty members and more than 300 staff members.

He received many awards for his work including the 2013  Mildred Weisenfeld Award for Excellence in Ophthalmology from the Association for Research in Vision and Ophthalmology (ARVO). This award is presented annually to an individual in recognition of distinguished scholarly contributions to the clinical practice of ophthalmology. In 2012, he received Duke University School of Medicine Medical Alumni Association’s Distinguished Faculty Award.

Edward Buckley, MD, will serve as acting chair of the Department of Ophthalmology, effective immediately. Dr. Buckley is a highly respected administrator and renowned pediatric ophthalmologist. He is the Banks Anderson, Sr. Distinguished Professor of Ophthalmology and Pediatrics and has served as Vice Dean for Education for the School of Medicine since 2008. He is also director of the pediatric ophthalmology fellowship program. Dr. Buckley will continue to serve in these roles while serving as acting chair of the department.