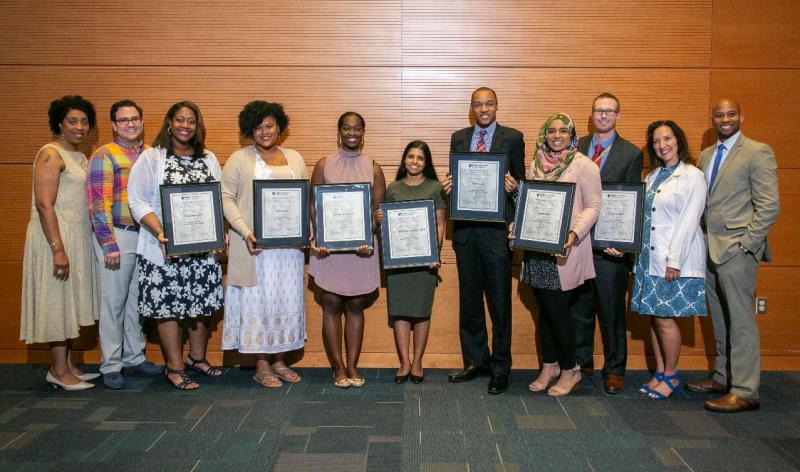 The Office of Diversity and Inclusion’s 2019 Michelle P. Winn Inclusive Excellence Award ceremony held in June honored faculty, staff, and trainees for their contributions to diversity and inclusion within the School of Medicine.

Chief Diversity Officer Judy Seidenstein opened the ceremony encouraging the audience to “speak the truth even if your voice shakes” on matters and issues, from LGBT+ equality to incorporating diversity and inclusion in the workplace.

The Michelle Winn Inclusive Excellence Award was created in 2016. Winners are nominated by their fellow staff, trainees, and students for their service, leadership, research, and education.

Taylor, an assistant professor in the Department of Orthopaedic Surgery at Duke Raleigh Hospital, was recognized for advocating for under-represented groups within the Department of Orthopaedic Surgery. As the chairperson of Diversity and Inclusion for the department, she works with colleagues, institutional leaders, and pipeline organizations to develop strategies that provide a sense of belonging and inclusion.

“The next steps I hope to take with [Diversity and Inclusion] will have much to do with creative strategy. In other words, achieving innovation by thinking bigger, not feeling limited by resources, time, or energy, and having the courage to empower others to speak up,” said Taylor.

Joseph English, MHA, is a senior business manager in the Department of Obstetrics and Gynecology. He joined the School of Medicine Inclusion’s Council in 2016. While working at Duke, he has served as the co-chairperson of the Measurement Matters Working group and as the department lead for Epic integration.

“The United States has always been a melting pot of diverse cultures and people, and research has confirmed diverse groups develop more creative ways to solve problems,” English said. "I am humbled and honored to be part of an institution that places such an emphasis on being leaders in the D&I space.”

Shaunte McKay, MD, and Dinushika Mohottige, MD, MPH, received the 2019 fellow and resident award. McKay is the co-founder of the Duke Minority Housestaff Association, which provides professional development and community service opportunities to under-represented residents and fellows. For the past two years, she has served as the co-leader of the Pediatric Diversity and Inclusion Committee. McKay has partnered with pipeline initiatives to improve diversity and inclusion within the Department of Pediatrics.

Mohottige is a second-year clinical research fellow in the Department of Medicine for the Division of Nephrology. In 2017, she served as the Internal Medicine Chief Resident for Ambulatory Medicine at Duke Regional Hospital and became a member of the Civility Leadership Team in the Department of Medicine that same year. Mohottige has focused primarily on intersectionality within diversity, inclusion, and equity-focused research and advocacy.

“The time is now for ongoing culture change in which all of us, regardless of what department we are in or what institution we're a part of, to ensure we instill values of diversity, inclusion and equity into everything we do,” Mohottige said.

Clay has engaged in diversity and inclusion since she was a first-year student at Virginia Commonwealth University and was a recipient of the National Institutes of Health (NIH) Initiatives for Maximizing Student Development Program Fellowship. During her undergraduate studies, she mentored minority high school students interested in pursuing careers in STEM. Clay is enrolled in a PhD program in Cell Biology and serves as the co-coordinator for the department’s Diversity and Inclusion Committee. She continues to support underrepresented students in STEM through initiatives such as the Duke Society for the Advancement of Hispanics/Chicanos and Native Americans in Science (SACNAS).

“Diversity is excellence, diversity makes us better,” Clay explained. “But it’s not just about diversity. It’s also about feeling like this is where you should be, feeling this is where you belong. I think it’s very important for us to actively recruit diverse people as well as make them feel that they can help themselves to the table one hundred percent and contribute.”

Iftikhar is a second-year Doctor of Physical Therapy (DPT) student who uses her leadership role across various platforms. She founded Duke DPT Humanities, Diversity, Education, and Mental Wellness clubs as a first-year student and currently serves as the director of communications and blog director for the North Carolina Student Special Interest Group. In her downtime, she works to recognize and reduce issues of prejudices, microaggressions, mental health, and academia among minorities in healthcare.

Jones, a rising fourth-year medical student, discovered his passion for diversity, inclusion, and mentorship at Florida A&M. As an undergraduate student, he worked with local schools to help prepare students for college, graduate, and professional school. At Duke, Jones  has served as the admissions representative for the Student National Medical Association (SNMA). He spends his summers partnering with Duke Summer Biomedical Sciences Institute on pipeline initiatives and is interested in researching racial/ethnic and social determinants of health.

Kelly, a fifth-year student in the Duke Medical Scientist Training Program (MSTP), has collaborated with peers on addressing health disparities, social determinants of health, and bias. She encouraged a group of students to act on these issues, helping to establish a course for first-year students known as Cultural Determinants of Health and Health Disparities (CDHD). Kelly has served as the student director of the CDHD and as the MSTP student body president where she has implemented activities for current and future students interested in medicine and science.

The late Michelle P. Winn, MD, was an associate professor for Nephrology in the Department of Medicine. She passed away in 2014 after a courageous fight with pancreatic cancer. Winn was known as a visionary, an outstanding researcher, and was passionate about diversity and inclusion. She mentored young scientists and physicians studying at Duke University and made outstanding contributions to the study of genetics and kidney disease.