Ask the OEDI: Hispanic, Latino, Latina, Latinx - Which is Best?

A variety of terms are used to describe people who come from, or have family roots coming from, countries in Latin America and the Caribbean. In the United States, two terms are most frequently used, sometimes interchangeably: Hispanic, and some variation of Latino, Latina, or Latinx.

With National Hispanic American Heritage Month coming up, we'll use our first “Ask the OEDI” column to discuss these terms, why they matter, and why many people from these communities have complex feelings about what term(s) they prefer. We’ll also share some links to resources where you can read more on the subject.

Is there a difference between the terms Hispanic and Latino? What do they mean?

The short answers to these questions are “yes,” and “it’s complicated.”

At the most basic level, the terms Hispanic and Latino refer to two different, partially overlapping groups*:

Hispanic refers to a person with ancestry from a country whose primary language is Spanish.

Latino and its variations refer to a person with origins from anywhere in Latin America (Mexico, South and Central America) and the Caribbean.

According to these definitions, a person from Brazil (where Portuguese is spoken) would be considered Latino (and not Hispanic) and a person from Spain would be considered Hispanic (but not Latino). A person with Mexican ancestry could be considered both (depending on where in Mexico they came from and their own sense of identity; a person of Mayan heritage or a Colombian person whose family fought for Spanish independence might understandably bristle at a term that assumes a connection with Spain).
Terry Blas defines the differences between the two terms as follows: 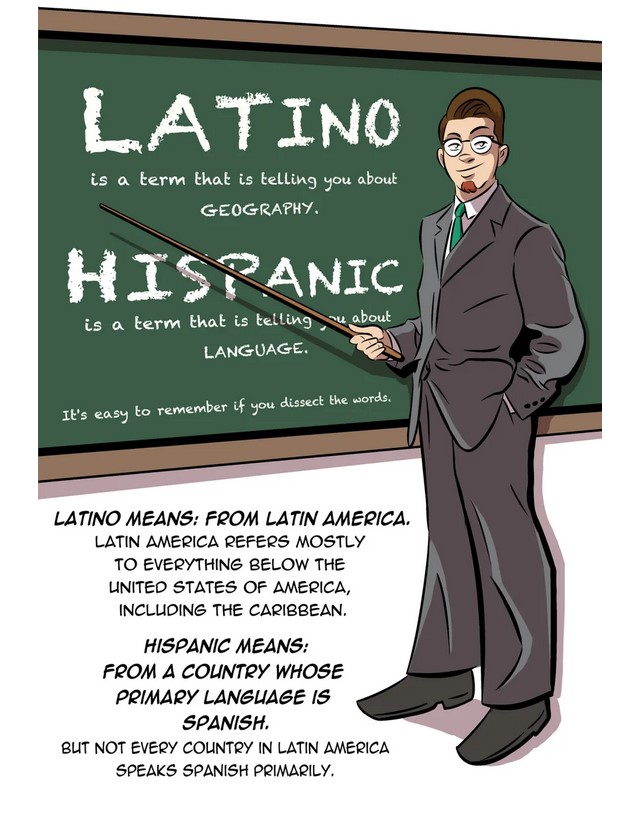 In addition to these definitions, the terms Hispanic and Latino have histories and associations that differ from person to person, depending on where they grew up, their family’s country of origin, and other factors.

*In the United States, at least! Other countries, including those in Latin America and the Caribbean, have their own equally complicated terms and identities.

What about Latino, Latina, and Latinx? What do those endings mean?

These words are all gendered forms of the same word. Spanish is a gendered language, which means all nouns have either a feminine or masculine form. Feminine-associated words typically end in “a”, while masculine-associated words typically end in “o.” Spanish has no gender-neutral nouns or pronouns (like our “they” or “it”), so all nouns have to end in one of these forms. When a noun refers to a mixed-gender group or a collective of individuals the masculine form is used.

This tradition can cause problems for Spanish-speaking feminists, who would rather not have men and masculinity to be considered a “default” perspective. For example, the Spanish word for girl is “niña,” the word for boy is “niño,” and the word for a group of girls and boys is “niños,” effectively erasing the existence of girls. Spanish speakers who are gender fluid, or who don’t identify exclusively as men or women, may also feel that being forced to use a masculine or feminine pronoun conflicts with their identity.

The term “Latinx” attempts to correct this problem by offering a gender-neutral version of the term that does not end in “o” or “a.” However, this alternative creates some problems of its own. To start, words don't naturally end in an “x” sound in Spanish, making the word sound awkward when spoken. Additionally, some members of the Latino community feel this term has been imposed on them by an English-speaking, mostly academic audience. 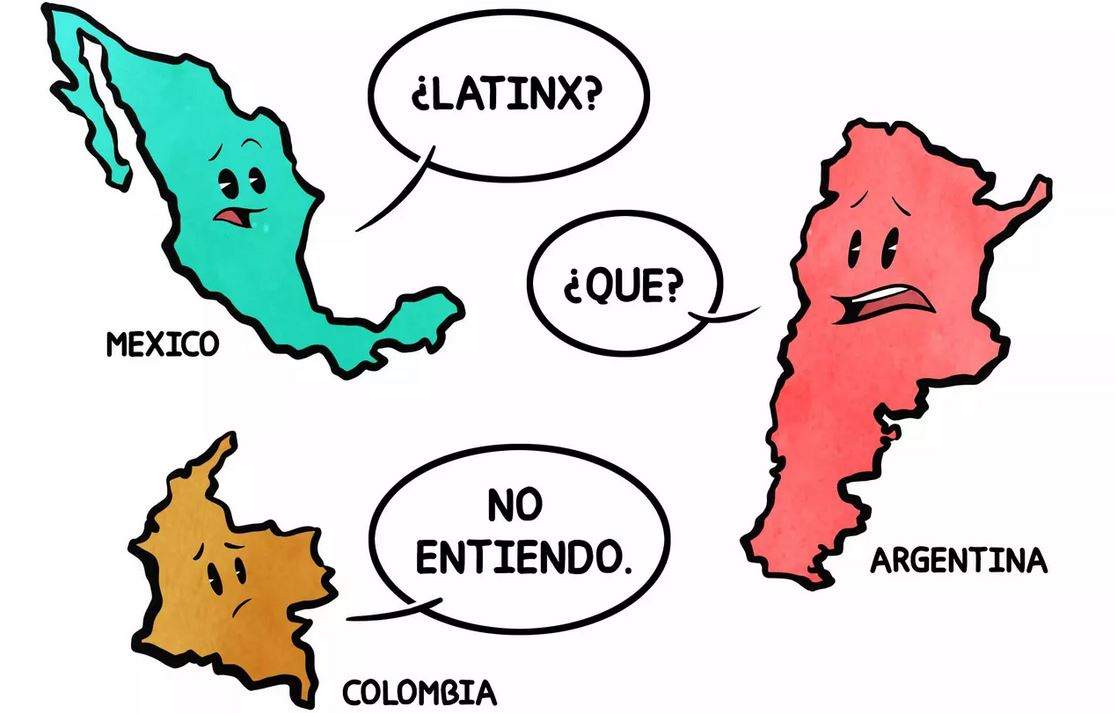 Blas has another cartoon essay in which he examines his own feelings on the subject, and offers his own novel solution, Latine, here.

What term is best to use?

In academic circles, Latino/a/x has recently become the most frequently used term, though both are still in use (even in these circumstances, the language/geography rule applies: a Hispanic Studies Department is likely to focus on language and literature, while a Latino/a Studies Department will be more likely to study the living people in or with heritage from Latin America).

People with origins from Latin America or the Caribbean may consider themselves as Latino or Hispanic, or prefer neither and consider their race to be their country of origin (such as Colombian, Dominican, or Mexican-American). The best answer to use may depend on the specific situation, the person’s personal preference, and the context.

If you're thinking about using the term, some thoughts to consider are:

Finally, it’s good to note that this language and terminology evolves over time, just as it does for people of other identities. The best terms to use in 10 or even 5 years may be different than what they are now.

How do people of Hispanic or Latin American descent within the School of Medicine feel about these terms?

It’s complicated!
We asked several people from across the School of Medicine about what term they prefer. Their answers, while not representative of the thousands of members of the Latino or Hispanic communities at Duke, share some of the diversity of preferences and feelings of the subject, and help illuminate why there is no “one size fits all” solution for this diverse population. 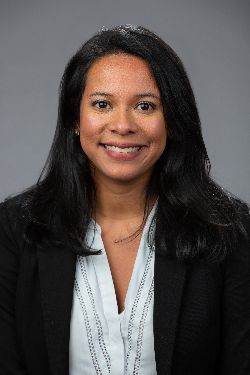 Claudia Gonzalez Hunt, PhD
Postdoctoral Associate
Family background: Panamanian, first in immediate family to immigrate to the United States
What term do you prefer? Hispanic or Latina, for me personally.
Why do you feel this way? Although usage of the term latinx does not upset me in any way, it strikes me as anglicizing a term adopted from a different language. I think it’s better to exclusively use gender-neutral English words (such as Hispanic, or Latin American). 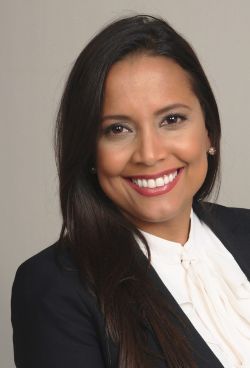 Danelvis Paredes, MD
Neurology Resident
Family background (country): All my family is from the Dominican Republic. We moved to Puerto Rico when I was 3 years old, and I have been living in the U.S. for two years.
What term(s) do you prefer? Latino/Latina
Why do you feel this way? I personally preferred Latina/Latino, which makes me feel more deeply about my real roots. Because Hispanic refers to language, or anyone who has ancestors from Spain, it would include people from Equatorial Guinea, which is in Africa. For this reason, I feel Latina/Latino is more representative of where I come from. Latinx makes no sense to me, and I don't feel that it represents me. The term is trying to be more inclusive, but it loses the beauty of our culture which includes and distinguishes between females and males through our language. 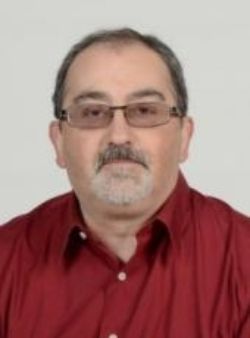 Ángel Romero Ruiz, MMC, CNM
Program Coordinator, Duke Population Health Management Office
Family Background: Iberian peninsula (Spain and surrounding regions) and Italy
What term(s) do you prefer? Hispanic. Otherwise, Latina/o/x, depending on gender. Using Latinx exclusively is not inclusive.
Why do you feel this way? I prefer Hispanic. Many people in academia adopted Latinx to include all Latin Americans. I have a problem with that. First, Latinx is very ugly to my ears, especially in Spanish. I also see it as a form of cultural imperialism, imposed by the English-speaking community, removing gender. For me the problem is when words from another language are used in English.

I don't know who started using Latino and Latina in English. In the American music industry, the term used for decades is the gender-neutral Latin. There is Latin jazz, Latin music, the Latin Recording Academy (which includes Spain and Portugal, by the way). I have many coworkers and friends who support the LGBTQ community but really dislike being called Latinx and prefer to be called Latinas or Latinos or hispanos. 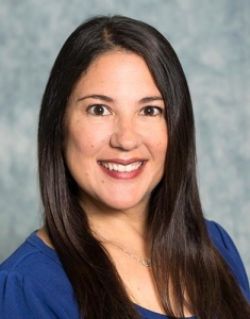 Mara Sanchez, MMedSc, PA-C
Physician Assistant, Duke Center For Metabolic & Weight Loss Surgery; Consulting faculty for the Duke PA program
Family Background: I’m a Cuban American, born in the US, to Cuban parents
What term(s) do you prefer? I prefer to be called Hispanic,  although I do appreciate that being “Hispanic” falls under the Latinx/Latina umbrella.
Why do you feel this way? I grew up hearing the term “Hispanic”, and identified with it because of my heritage/culture, and ancestry as I then understood it referred to people of Spanish descent/ who speak Spanish, and are of Latin origin.

Then I learned about the term Latino/Latina which referred to people from Latin America/South America. I was excluded from that group, which became confusing. At that time in my early teens, It was difficult to grasp, but it was easy enough if it was about location. In South Florida, a melting pot rich with a variety of cultures,  it wasn’t something we belabored much. In my opinion, I think most Hispanics/Latinx actually identify more often with the country of their ancestry/or where our parents are from (or obviously for those that immigrated to the US, to the country or island where they were born/grew up). 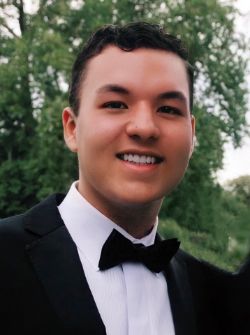 Matthew Lacayo
Research Technician, Department of Neurosurgery
Family Background: My mother and father were both born in Colombia. My mother is from the capital, Bogotá, and my father from a river town, Aracataca. Because I was born in the US, I consider myself second-generation (although the labeling is itself ambiguous).
What term(s) do you prefer? no preference
Why do you feel this way? If I ever do refer to myself as Latino—or any ambiguation of it: Latin@, Latinx—it is mostly (not exclusively) in line with Western tropes (i.e. "I love to dance—it's the Latino in me,” cuing Shakira's "Hip's Don't Lie"). If I denote myself as Hispanic, it's for some inventory/survey given by school, state or by some passerby.

I will note that I have begun to use Latinx more deliberately to invoke the entire Latin-American population and all variations of it, especially since it has been popularly introduced in the academy. Along the same vein, I don't recall having intentionally labeled myself as "Latin@"/"Latina/o"/"Latine" but do see each term as a very cool (con)fusion of Spanish dictum and American thought, reconstructing the gender binary present in one culture with that binary's significance in another (this is also seen in one pronunciation of Latinx, "Latin-equis," as a literal hybridization of both languages). I don't belong to just one category in particular (hence, no preference), yet I strangely feel I live the reality of all of them. 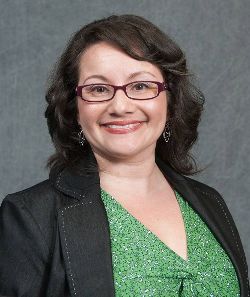 Maria Moreno
Communications Specialist, Duke Office for Institutional Equity
Family Background: My family originates from Mexico, but it’s a challenge to pin-point a generational value in the U.S. Much of my dad’s family were known to travel back and forth between the U.S. and Mexico for decades. In the 1970s, my father met my mother while vacationing in Mexico. They married and they moved to Los Angeles, where my siblings and I were born and grew up.
What term you prefer? In order of preference: Equally Mexican American or Chicana, then Latina, and finally Hispanic.

I am proud of my Mexican American/Chicano heritage, which is why I prefer that identifier. However, I also like Latina because Mexico is part of Latin America and I feel it’s important for Spanish-speakers who hail from Mexico and its neighboring regions to support each other. Finally, I like Hispanic because it acknowledges the Spanish roots, despite the connection with colonization. I believe that the advent of varied identifiers among Latinos in the United States results from feelings of resentment toward colonization and the desire to establish an identity, especially in a "melting pot" nation that seems to place a heavy burden on what it means to be American when everyone looks so different. It's certainly a result of societal and racial struggles. I also think it results from the penchant for English to borrow words from other languages but anglicize them (i.e., butcher them into sounding more English as opposed to trying to keep original pronunciations). It's a complicated and evolving topic.

Where can I read more on the subject?