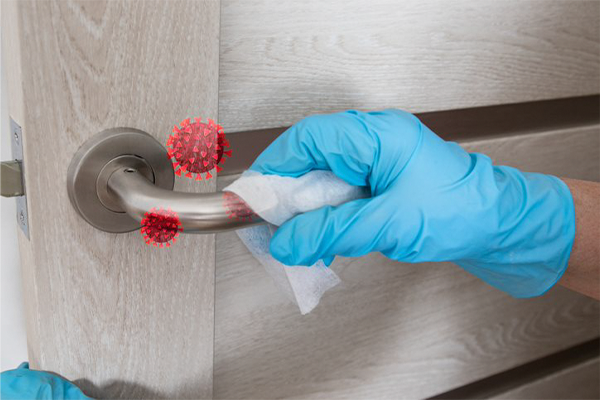 There's no way around it: we share our indoor spaces with bacteria and other pathogens. Duke University School of Medicine staff member Bobby Warren, MPS, spends his days thinking about how to reduce the numbers of those "bugs" in hospitals and clinics.

Warren is director of the Duke Disinfection, Resistance, and Transmission Epidemiology lab, also known as the DiRTE (pronounced like “dirty”) lab, which conducts research to understand how pathogens move around and get transmitted in health care settings, and how to stop them.

"We look through the entire hospital to find out what's dirty, how do we currently clean it, and how to make it better," Warren said.

The lab, within the Division of Infectious Diseases in the Department of Medicine, also conducts microbiology studies if they are needed when an infectious outbreak happens in Duke University Health System. The lab is part of the Duke Center for Antimicrobial Stewardship and Infection Prevention, directed by Deverick J. Anderson, MD, MPH, professor of medicine. The center comprises several programs that aim to keep patients safer through preventing health care-associated infections and preventing the emergence of antibiotic resistance. "There are many parts of this puzzle when it comes to how to keep our patients safe," Anderson said.

Despite strict cleaning protocols, about 721,000 health care-associated infections happen each year in the United States, and 75,000 patients die in the hospital because of them.

"We are putting things in patients that are important and necessary, but by their very nature puts you at risk for infections, like IVs and central lines and ventilator tubes," Anderson said. "We can never eliminate the risk of infection, but we can minimize it."

The DiRTE lab grew out of single study funded by the Centers for Disease Control almost 10 years ago to evaluate UV light for disinfecting patient rooms, Anderson said. Over the last few years it expanded into its own program within the center.

Warren has been responsible for much of the DiRTE lab's growth. "Bobby has been such a driving force," Anderson said.

A study published November 15, 2022, in JAMA Network Open provides an example of the rigorous testing the lab conducts to evaluate new cleaning methods.

The study documented that the enhanced cleaning method showed promise for reducing "reservoirs" of bacteria on surfaces in rooms of patients known or suspected to have highly transmissible infections, such as C. difficile or MRSA.

After 24 hours, the surfaces that received the enhanced cleaning method had a significantly lower burden of contaminants.

"This cleaning method was of interest to us because it has been shown to not only disinfect at the moment it was applied, but it also has some form of antimicrobial activity for the next 24 hours," said Warren, the first author of the study. This study was a first step in evaluating the method in real-world hospital conditions.

"The take-home message is that in health care settings, we really need some sort of enhanced cleaning protocol that takes the burden off of human workers, who are already overburdened," Warren said.

Anderson was the senior author of the study, and other authors were Aaron Barrett; Amanda Graves, MPH; Carly King; and Nicholas A. Turner, MD, MHSc.

This study was small, but it used a unique sampling method designed to address a challenge in this type of research: the fact that contaminant burden varies from patient to patient and thus room to room. "Different people's microbiome shedding is very different,” Warren said. “So we can't control for the room's baseline pathogen level." That means that comparing cleaning methods across different rooms may give misleading results.

To correct for that, this study applied the enhanced cleaning method to one-half of each of three surfaces in each room (sinks, overbed tables, and bed rails). The other half of each surface received the standard cleaning protocol applied as usual by environmental services workers. So each surface had both a control side and an intervention side.

"We found such value in this strategy that we're going to use it in two other studies we're getting off the ground in the next couple of months," Anderson said. One of those will test the enhanced cleaning method in a larger study (1,000 patient rooms) funded by the CDC. The study will also look at a wider range of pathogens.

Warren started working at Duke in 2015 as a research assistant, then in 2018 advanced to clinical research coordinator. In 2020 he became director of the DiRTE Lab. He has an undergraduate degree in biology and music performance (he still plays the euphonium, a kind of small tuba, in the Triangle Brass Band).

In 2021 he won the William Rutala Scholarship Award from the Society for Healthcare Epidemiology of America. The scholarship supports a non-clinician infection prevention researcher to attend the society's annual conference.

Warren didn't set out to study the microbiology of health care environments, but after he completed his first study in 2015, he was hooked. He examined whether an anti-microbial coating on hospital scrubs could reduce cross-contamination. "I didn't find any positive results, but then it became a puzzle. What can we find in the environment? How can we stop it?"

He may come by it honestly. It dawned on him a few years into this career that his mother is "almost a germaphobe," he said. "When I was a child, she was obsessed with keeping floors and surfaces very clean. That's probably built into my brain somewhere."